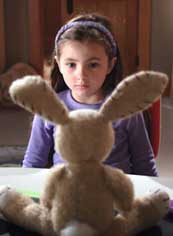 I’ve no doubt “The Last Mimzy” will keep you glued to your seat. Yes, it’s a hokey premise–people from the future send a box of “toys” (and in particular, a stuffed rabbit) for two children to find in the past–and it only gets hokier from the moment Emma and Noah find these treasures on the beach. But you have to remember: “The Last Mimzy” is made by the same people who did “Close Encounters of the Third Kind.” So it follows in the vein of that movie.

What’s fascinating about this story is the way it mixes science–virtual technology and string theory–with Buddhist spirituality. As Emma and Noah learn to “play” with these mysterious toys, Noah becomes a scientific genius of some sort–he can suddenly talk to spiders and make objects move with this mind–and Emma becomes a meditation guru.

Noah’s science teacher (played by Rainn Wilson of “The Office”), whose wife, Naomi, (Kathryn Hahn) happens to be a palm reader and aficionado of all things Tibetan Buddhist, steps into the picture not only because Noah develops a shocking science project about spiders, but because Noah is drawing what are called Mandalas–ancient Tibetan artworks that depict the history of the universe through intricate, beautiful, and mind-gripping patterns.

Naomi helps the family understand the spiritual significance of Emma and Noah’s new intelligence, since not only do Noah and Emma recognize all of the most famous Mandalas, but the kids also know the proper names of the historical artwork.

And then of course there is Mimzy, the stuffed rabbit. Though Mimzy is central to the film and Emma’s enlightenment–an almost human piece of virtual technology that becomes Emma’s teacher/guru–it’s still a stuffed rabbit. The premise is that because Mimzy was meant for a child, it had to be a stuffed animal.

This is where the film’s holes start to show. Mimzy is teaching Emma the art of meditation and mindfulness. And up until now there are some very interesting, cool things that the children learn–string theory, levitation, and many other scientific and spiritual subjects. But how does this help them save the future? What’s wrong with the future? And do the kids use what they have learned to save the future? Is that what Mimzy’s ultimate purpose is? Not really.

Without giving away the ending, I can say that it gets out of control and is the biggest disappointment of the film, so be warned. The payoff behind why “the toys” were sent is utterly weak and unsatisfying. But if you can forgive the ending, “The Last Mimzy” is a family-friendly, heady trip.

Warrior, poet, and anointed king are a few words to describe David. David’s rise to the throne has humongous giants, lions, and Philistine soldiers. Following unparalleled wins to lead to tragic failures, David will face the most challenging fight of all: the one within himself. Journey with David as he becomes a man after God’s […]

Australian actor Nathaniel Buzolic took to Instagram late last month to share an image of Mount Gerizim. The actor, who played Desmond Doss’s (played by Andrew Garfield) brother ‘Hal’ in “Hacksaw Ridge” and had a role in “The Vampire Diaries,” shared the image along with a commentary on the mountain’s importance. The mountain is mentioned […]

Due to the location’s dark past, film mogul Tyler Perry recently revealed that he used God’s Word to establish the foundation for his 330-acre Atlanta, Georgia, studio. Perry acquired the land for Tyler Perry Studios in 2015, and since its grand opening in 2019, the studio has been the launching pad for hundreds of TV […]