Remember the days when “Ally McBeal” was only kind of quirky… before the dancing baby? Can you recall the name of the show that became the scene-chewing extravaganza known as “Boston Legal?”* Remember the thought-provoking “Picket Fences?”

Apparrently, the producer of all those shows, David E. Kelly, doesn’t, judging from his latest foray into the dramedy field, “The Wedding Bells.” The story of three sister wedding planners–Jane, Annie and Sammy Bell, get it?–who inherited their business, The Wedding Palace, from (irony alert) their divorcing parents! Along with a gaggle of zany characters–the sassy assistant, the passionate chef, the wedding singer with aspirations, the playboy photographer–the sisters deal with everything from Bridezillas to “gay” grooms to their own (more irony on its way) relationship problems.

Perhaps it’s like medical professionals who just can’t get into medical shows, but having once planned weddings to subsidize my graduate studies, I was less-than-engaged by the show’s pilot–filled with wedding stereotypes, cookie cutter characters (the chef who is overly passionate about his food and his boss) and hard-to-swallow plot points (the youngest sister sleeps with one of the groomsmen; generally, a big no-no. And tacky, too).

Yet, every once in a while, a wonderfully crafted, heartfelt line would find its way above the fray and pull me back in, or I’d find myself smiling at an amusing moment that only wedding planners would nod knowingly at.

Last week’s episode was more of the same: Although Sammy doesn’t sleep with the usher who’s in love with her, she just shoots him with a pellet gun in the… well, you get the idea. It’s the photographer who ends up sleeping with a member of the wedding party. The storyline with the eccentric groom whom everyone assumes is gay because he wears feathered boas, and has his groomsmen sport purple boas, saved the episode with its delightful tale of a straight man raised by gay parents.

If you are looking for a zany, romantic dramedy to fill your Friday nights, then “The Wedding Bells” is a great catch. Personally, I’ve got commitment issues. 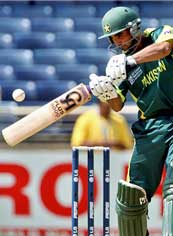 World Cup Cricket: When Passion Gets Out of Hand
archives most recent
More from Beliefnet and our partners
previous posts