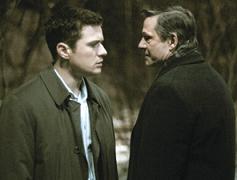 In “Breach,” director Billy Ray of “Shattered Glass” tells yet another gripping story of one man’s utter duplicitousness. This time around, however, the man in question, Robert Hanssen–played brilliantly by Chris Cooper–succeeds in bringing down not only himself, but the whole FBI with him. Dozens of FBI agents and assets are compromised, and the entire Bureau’s identity is thrown into crisis over Hanssen’s 20-year stint as a double agent for the Soviets.

What’s puzzling about Hanssen–considered “the greatest breach” in the FBI’s history–is the fact that he is a devout Catholic. His entire family is Opus Dei, he attends daily Mass, goes to confession regularly, prays the rosary constantly, and his office and home are filled with crucifixes and religious paraphernalia.

How can a man this orthodox in his religious ties become such a criminal? How could he, in good conscience, live with himself knowing that he was responsible for the deaths of over 50 men and women based on the intelligence he passed along in exchange for millions?

Is it possible that this faith enabled the behavior, rather than challenged it?

This is what I left the theater wondering. Is it possible that going through the sacrament of confession, with its corresponding penance–daily Masses, rosaries, etc.–was how Hanssen somehow maintained the behavior in his own mind? Did he believe that, although he committed treason regularly, he could jsut walk into a church seeking absolution and it would be granted, and that with enough penitent acts he could “pay” for his sins?

Or did his devout Catholicism ultimately break him–tormenting his conscience with guilt and the knowledge that true penance would only come through getting caught by the people he betrayed?

It’s hard to know the role that faith truly played in Robert Hanssen’s 20-year career of treason and in his subsequent fall, but there’s no doubt that director Billy Ray has delivered a stunning, provocative film. Go with a friend because you will want to talk about it afterward.