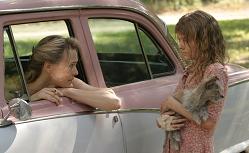 The fake controversy surrounding Dakota Fanning’s new film, “Hounddog“–in which the child actress plays a victim of abuse who, in one much-discussed scene, is raped–demonstrates the unfortunate and continuing power of a press release. Political activists on both sides of the aisle have learned that well-timed (and unsubstantiated) accusations can be an effective fundraising tool with their constituencies. Such calculated (and often groundless) attacks demonstrate why celebrities are so dependent upon publicists to navigate volatile and tiresome cultural wars.

In feigning concern over Dakota Fanning’s on-set abuse, those who shined a spotlight upon “Hound Dog” stirred up substantial interest in the small, Southern gothic film. Tickets for the premiere became hard to acquire. Accusations flew across newspapers and the Internet. But the few who were able to squeeze into the packed theater reported that the rape scene in question was handled with restraint. Moreover, film critics considered the film itself a fairly unoriginal revisiting of trailer trash stereotypes. The end result: much ado about fairly little.

Overlooked at Sundance amidst the pseudo-event were transcendent dramas about children threatened by genuine dangers. “Trade” focuses upon human trafficking, particularly upon children sold into sexual slavery. “Ezra,” “The Devil Came on Horseback,” and “War Dance” deal with civil wars in Africa, where kids are all too often abducted and turned into soldiers. “Ezra” reports from Sierra Leone and “The Devil Came on Horseback” follows the transformation of a soldier into an activist in Darfur.

“War Dance” documents the dire situation facing war refugees in Northern Uganda. Over two million members of the Acholi tribe have been exiled from their homelands because of the ill-named Lord’s Resistance Army. “War Dance” follows the stories of three children amidst the 60,000 refugees gathered at a “displacement camp.” It is set against the backdrop of a national music competition, where war orphans from Patongo Primary School hope to compete. Produced by Shine Global to raise awareness and funds for the refugees, “War Dance” celebrates the power of music and dance to overcome the most overwhelming conditions. 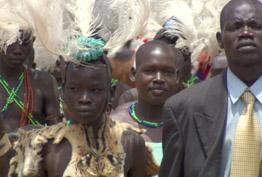 For “War Dance,” the husband and wife team of Sean Fine and Andrea Nix Fine won the award for best documentary directing at Sundance. Jeff Consiglio’s editing juxtaposes the horrors of war with the lush colors of the African bush. The sounds and images are beautiful and haunting. The camera also serves as a confessional for three children, a safe place to reveal the painful realities they witnessed.

We see the prayers of Nancy, as she takes on the role of mother to her brothers and sisters. Dominic wants to grow into Uganda’s finest xylophone player. Rose suffers under the hand of her aunt, pining for her mother and her old life. Despite their devastating circumstances, the children practice and perform the traditional Bwola dance with profound hope and joy.

“War Dance” reminds us where the religious leaders who claim to care about children should focus their efforts. It is the real story emerging from Sundance that the press needs to follow. Thankfully, Think Film has plans to release “War Dance” in theaters, making it an early contender for next year’s Oscars. The movie going public will ultimately decide which films and stories to dignify.

For more info about War Dance or how to support children in Patongo, Uganda, go to www.shineglobal.org.

Craig Detweiler works for the Brehm Center for Worship, Theology and the Arts (www.brehmcenter.org) at Fuller Theological Seminary. 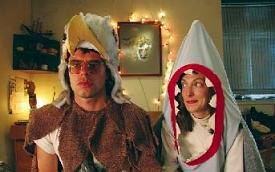 LIVE AT SUNDANCE: The Next "Napoleon Dynamite"?
archives most recent
More from Beliefnet and our partners
previous posts