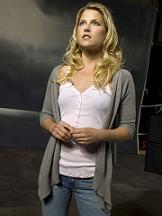 NBC’s fantastic new show “Heroes” finally returned this week after a too-long holiday hiatus, premiering with the episode “Godsend” and leaving viewers with some interesting ideas to ponder: Are the heroes’ special powers gifts from God?

At least one of the heroes thinks so. D. L. Hawkins–right-hand man of Claire’s (the cheerleader) father, whose power is to block all use of a hero’s ability with his presence–played the role of spiritual sage to Claire’s doubts and struggles about what she thinks are her “freakshow” abilities. As Claire expressed her wish to go back to a life where things are “normal,” Hawkins urged her to be grateful for the gifts bestowed on them. “Gifts?” she replied with disdain and skepticism. For Hawkins, not only are their superpowers gifts from God, but they are God, he expressed with conviction.

Hawkins isn’t alone either. Hiro (the most adorable character on television)–who can bend space and time–received a special sword last episode, which is literally meant to represent his “divine” talent. And in keeping with Hiro’s wide-eyed, child-like wonder about all that is happening to him, he accepts this divine symbol with a kind of blind faith.

Given that some of the “heroes,” like creepy serial-killer Sylar, use their powers for utter evil, the idea that all superpowers are divine is up for debate. Is it the power itself that’s divine? Or how a person receives and wields the power an act of God?

LIVE FROM SUNDANCE: What is a Sundance Film?
archives most recent
More from Beliefnet and our partners
previous posts