Many year’s ago, a relative of mine joked that she may have to induce the birth of her third child since the expected due date was the same as the Super Bowl and she wanted her husband to be there for the birth. Luckily, said child arrived naturally three days before the big game, and we never had to witness the eventual bludgeoning that would have ensued when the football-watching father didn’t realize that mama’s comment was meant to be funny, not factual.

But don’t tell that to Colleen Pavelka a Homer Glen, Illinois, woman who opted to be induced last Friday so that her husband wouldn’t miss the Chicago Bears’ NFC playoff game against the New Orleans Saints.

With a due date set for January 22, Pavelka was scared that she might go into labor at Soldier Field and ruin her hubby’s big day:

“I thought, how could [Mark] miss this one opportunity that he might never have again in his life?” she told the AP.

Sure, inductions are on the rise and are being schedule for all sorts of debated, convenience-driven reasons these days. And having grown up in Chicago Bear’s territory, I understand the rabid nature of the Soldier Field faithful. (Mr. Pavelka wore a ‘Monsters of the Midway’ shirt during the delivery, reports the AP.)

But it strikes me as wrong to induce the birth of your child, to ask him to leave the comfort of the womb before he’s ready, and to take on the inherent risks of induction, just so your husband can attend a football game. Sure, it’s a playoff game, but isn’t witnessing the birth of his child, even a second child, also “one opportunity that [Mr. Pavelka] might never have again in his life”? (Then again, discounting the Bears’ recent comeback, he could have been waiting a while.) Besides, what would have been better than Mrs. Pavelka going into labor at Soldier Field on the day Da Bears made it to their first Super Bowl in over 20 years?

What do you think? Is scheduling the birth of a child in order for yourself or your spouse to attend a sporting event a reasonable thing to do? Or would you throw a flag on that play? Let Idol Chatter know. 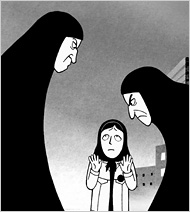 "Persepolis" the Movie is Coming Soon...
archives most recent
More from Beliefnet and our partners
previous posts