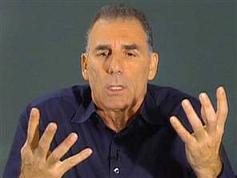 While Mel Gibson blamed his anti-Semitic rant a few months ago (most would say unsuccessfully) on a drunken lapse of judgment, Michael “Cosmo Kramer” Richards’ only excuse for his racial epithets directed toward two African-American men is that he was angry because he was being heckled in the middle of a performance. The entertainment website TMZ acquired footage of Richards spewing various racial epithets during a stand-up comedy routine at The Laugh Factory nightclub last Friday–and by Monday night Richards, with the help of friend Jerry Seinfeld, was on David Letterman apologizing for his behavior and swearing he was not a racist.

So yesterday I was fully prepared for the media backlash to bury Richards in a pile of well-deserved criticism, just like it did to a certain other hate-spewing Hollywood figure recently. But other than the occasional soundbyte in which a moderately famous comedian or some Hollywood pundit mildly criticized Richards for his behavior, the backlash failed to materialize. Barbara Walters did not use the “Hot Topics” portion of “The View” to announce she would no longer watch “Seinfeld” re-runs. Denzel Washington did not make a public statement calling for Richards to have a meeting with the NAACP to begin the healing process. As far as we know, uber-agent Ari Emanuel didn’t tell a single one of his clients not to work with Richards in the future. Worst of all, last night Leno only dedicated one joke in his monologue to Richards’ fiasco before quickly moving on to other subjects.

All of which has left me feeling more than a little bit baffled. The man was doing stand-up. In a club. Where comediens often are heckled. Stating that hecking is an excuse for racial slurs is, in my opinion, about as strong of an excuse for his behavior as a student saying “a dog ate my homework.” Pardon me, Hollywood, but your hypocrisy is showing. While I am well aware that Richards is not as successful as Gibson, and I understand Richards hasn’t exactly announced that he will be playing Atticus Finch in an upcoming remake of “To Kill a Mockingbird,” I still can’t fathom why Hollywood isn’t showing more outrage over this hate speech.

Such an underwhelming lack of response by some of the most visible players in Hollywood brings up uncomfortable questions I don’t have the answers to. Questions like: Are some slurs more forgivable than others? Is the level of outrage over such slurs linked somehow to how much future worth their career is to Hollywood? And the biggest question of all in my mind: Would the outrage be greater if more Hollywood players were African-American and had more of a voice??