Whose Cross Is It? 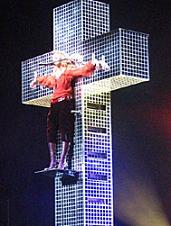 The Russian Space Agency recently turned down Madonna’s bid to get a spot on an upcoming mission. This must come as a disappointment to those Christians who would love to see the pop diva shot into space, once and for all.

Barely recovered from her latest U.S. concert tour–which includes the spectacle of the star posing on an enormous glittering cross and is now making waves internationally–some American clergy have been upset anew by NBC’s plan to show the disco-crucifix footage on “Access Hollywood.”

“By sponsoring Madonna’s mockery of Christ, NBC will insult the majority of Americans and millions more around the globe,” says Reverend Rob Schenck, who is president of an ecumenical group called the National Clergy Council.

Rev. Schenck, of course, begs the question as to whether Madonna is mocking Christ. Artists–and as glitzy and overwrought as Madonna can be, she still appears on the Arts page–have long availed themselves of the cross to express their religious views. Mel Gibson did as much, and perhaps offended as manywith his ecstatically gushing “Passion of the Christ.” The fact that Rev. Schenck may like one and not the other doesn’t mean Madonna is dissing Jesus.

Instead, in her ham handed way, Madonna appears to be calling those who espouse Christian principles to account. Here is the account of a Russian journalist who attended Madonna’s concert there last week (over the objections of the Orthodox Church):

What I–and, I assume, most casual observers–did not know was what the song would be and what the point would be. The song was “Live to Tell,” her 1986 hit, and the point was not subtle. Flashing behind her on a giant video screen were the faces of children and some statistics: the number of children orphaned by AIDS in Africa and the fact that without help they will all die before the age of 2. And then there was a long quote from “The Sheep and the Goats” story from the New Testament.”

At the end of the song, she makes a pitch for donations for these orphans.

Not coincidentally–and, okay, perhaps cynically–Madonna announced this week that she would work to raise $3 million to improve the water supply in the African nation of Malawi, where she’s already sponsoring a home for orphans. If she’s mocking Christ, she’s found a nice way to assuage her guilt.