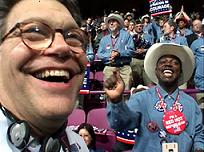 …Or so the comedian-turned-liberal political commentator claims during the initial moments of the documentary “Al Franken: God Spoke,” opening in limited released tomorrow.

Hilariously dressed in a Santa Claus-like beard and holding a Ten Commandment-esque tablet–presumably Al Franken’s mode of representing God–the film opens with Franken’s voice booming amid the clouds: “God Spoke! God spoke to me and he told me to write this down….” Franken is of course, mocking pundits and politicians who have been known (and heard) to imply that God speaks through them and the ideas they espouse–most notably President Bush. (This scene is sure to offend some viewers–though then again, those viewers it might offend probably won’t go see a documentary about Al Franken. They are busy at home reading Ann Coulter’s latest diatribe, “Godless.”)

But for viewers hoping for a Franken critique about God and politics, religion and the public square, Franken’s mockery of right-wingers’ claims to bend the ear of God is limited to those first moments. This documentary is not at all about religion or God (at least in any direct way), despite its title’s implications. It is, instead, an overview of two years in the life of Al Franken–which includes a good deal of sparring with Ann Coulter and the rise and subsequent demise of Air America, the liberal radio network Al Franken spearheaded. (OK, maybe “demise” is not the right word–but the network is having its troubles.)

The film is certainly a tribute to the career of Al Franken, specifcally how he uses the claims and foibles of our country’s O’Reillys and Coulters as a means to espouse his liberal point of view and make his targets look stupid in the process. The film also highlights Franken’s recent struggles to make Air America work. (It is having trouble finding its audience and has been dropped altogether in some major markets.)

Though I was disappointed to find out that the film has virtually nothing in common with its title, the documentary is sure to interest Al Franken fans. It’s as “fair and balanced” a film as one can hope from two unabashed fans of the documentary’s subject.