Youth Springs Eternal in the Bahamas? 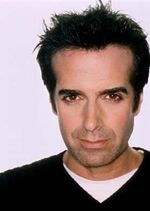 “Sure he may have walked through the Great Wall of China, wooed Claudia Schiffer, and used his superpowers to thwart would-be robbers, but those were mere parlor tricks,” writes Eonline‘s Josh Grossberg of magician David Copperfield‘s claim to have discovered the Fountain of Youth. We couldn’t have said it better ourselves, Josh.

Copperfield told Reuters that he has found the spring of eternal youth–the very same font that Juan Ponce de León was said to be looking for when he came upon Florida. Only instead of the Sunshine State, said fountain is actually in the Exuma archipelago, the Bahamas. According to the illusionist, who is planning on having the waters scientifically-tested, “You can take dead leaves, they come in contact with the water, they become full of life again… Bugs or insects that are near death, come in contact with the water, they’ll fly away. It’s an amazing thing, very, very exciting.”

And potentially very lucrative. Copperfield scooped up one of the islands for a reported $65 million and plans to turn it into “a posh, private retreat that the ultra-rich can enjoy for up to $392,000 a week.” Taking money from the pockets of the ultra-rich? Now, that’s a trick we’d like to see!

read next post
New Exorcism Pilot: Touched by an Anglican?
archives most recent
More from Beliefnet and our partners
previous posts

Warrior, poet, and anointed king are a few words to describe David. David’s rise to the throne has humongous giants, lions, and Philistine soldiers. Following unparalleled wins to lead to tragic failures, David will face the most challenging fight of all: the one within himself. Journey with David as he becomes a man after God’s […]

Australian actor Nathaniel Buzolic took to Instagram late last month to share an image of Mount Gerizim. The actor, who played Desmond Doss’s (played by Andrew Garfield) brother ‘Hal’ in “Hacksaw Ridge” and had a role in “The Vampire Diaries,” shared the image along with a commentary on the mountain’s importance. The mountain is mentioned […]

Due to the location’s dark past, film mogul Tyler Perry recently revealed that he used God’s Word to establish the foundation for his 330-acre Atlanta, Georgia, studio. Perry acquired the land for Tyler Perry Studios in 2015, and since its grand opening in 2019, the studio has been the launching pad for hundreds of TV […]