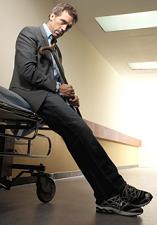 One of the reasons Fox’s “House” receives so much critical acclaim is because even when this medical drama tackles a topic that has been done to death on other TV shows, it finds a way to present an old story with a new twist. Last night’s episode, “House vs. God” is a perfect example: The cranky, bitter doctor treats a patient who claims he is a faith healer who receives messages directly from God.

However, instead of making a mockery of this boy as a misguided religious fanatic–which would be the strategy most shows employ–“House” cleverly centered on the doctors’ responses to the teenage boy, addressing the question of belief in a supreme being from a variety of viewpoints.

After the boy believes he has healed another patient in the ward, and the patient begins to show progress, House’s staff become fascinated with the possibility that they may have witnessed a miracle. House, intent on proving that his patient is no miracle worker, responds by barking such comments as, “There is nothing in this universe that cannot be explained,” and, “If God talks to you, you are either a scam artist or psychotic.” His co-workers confront House’s doubt in a divine being by offering such reflections as, “If a higher power exists, it is different than our minds as a species can conceive,” and, “Some people’s faith is more than symbolic.”

Better yet, his friend, the oncologist Dr. Wilson, explains why House refuses to acknowledge God: “A supreme being can squash you. You hate not being in control. That’s why religion bugs you.” Ouch. That hit a little too close to home for the Vicodin-popping Gregory House.

After an hour of twists and turns, featuring some of the best spiritual debate I have seen in a TV drama in ages, came the conclusion, in which the boy is discovered to have an outbreak of herpes from a sexual encounter. A frustrating end? Not for me. The conclusion of the episode finds all of House’s co-workers confronting the doctor’s smugness at the fact that he uncovered a fraud; they make clear they’ve retained their faith in spite of all that occurred. As Wilson tells his buddy House, “It’s possible to believe in something and still not live up to it.”

Better yet, Wilson follows up that statement by reminding his skeptical buddy, “House, you are as God made you.”

read next post
Time for a TV Turn-off?
archives most recent
More from Beliefnet and our partners
previous posts