A Spiritual Walk Begins With “16 Blocks” 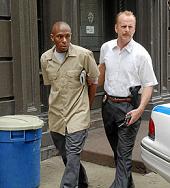 Who needs to see Bruce Willis play a down-on-his-luck, tough-but-tender cop… again? That was my thought when I allowed a friend to drag me to Willis’s latest action-adventure flick, “16 Blocks.” But while “16 Blocks” has all of the typical action thriller elements–car crashes, explosions, fight scenes–it also surprised me by actually taking time to explore some deeper questions about what happens when people in power no longer value human life.

The movie begins at 8:02 a.m., when a hung over and seriously depressed NYPD detective Jack Mosley (Bruce Willis) is assigned a seemingly simple task: escorting an ex-con, Eddie Bunker (played by Mos Def in a surprisingly strong performance), to a courthouse to testify at 10:00 a.m. before a grand jury. The distance between the lock-up facility and the courthouse is (you guessed it) 16 blocks. The only problem is that when some crooked cops try to kill Eddie, Jack realizes that helping Eddie arrive at the courthouse on time is going to be a lot more difficult than he thought.

What I liked best about this movie is that in between dodging bullets, Mosley becomes increasingly aware that he has lost his own moral compass. Should he value his past friendships on the police force more than he values the life of a mentally impaired criminal? If he confesses his own secret knowledge about the case in which Eddie is testifying, will he save a life, ruin his own, or make no difference at all? As Jack and Eddie go their separate ways at the end of the film, there is one moment in particular that serves as a great reminder that we should all find the courage to start over when we fail.

No, I am not exactly saying that we’ll be talking about “16 Blocks” at next year’s Oscars, but I am saying that this film strives to offer something beyond what this genre tends to accomplish. It offers action and adventue, with a little bit of soul.

Take My Oscar, But Don't Steal My Tagline
archives most recent
More from Beliefnet and our partners
previous posts