There are so many things that I wish I had known long before my marriage began to fracture.

I wish I had realized how critical it was to demand certain things. More importantly, I wish I had known that it was anything, but selfish to do so. Why? It was critical for the relationship to survive and thrive.

I think what I find equally as scary as not understanding this – I believed I did marry my equal.

2. Giving a person more than two chances to make you a priority. This is certainly something I demanded when I was young only you morph into a family and you tolerate things you may not have originally put up with. It’s quite simple. If you are not a priority to your spouse then you shouldn’t be with them.

3. Using too many words to demand respect. If someone doesn’t hear you the first time then shut up. It’s about them not you. Respectful people care enough to listen and to care. If you are repeating the same tired worries, grievances, stresses, over and over again then the person your with doesn’t care enough about you for it to matter to them.

4. Not realizing it’s impossible to have a healthy relationship with a selfish person. Selfish doesn’t go two ways and relationships are two way. Marriage is not a selfish sport – it won’t work.

5. Not realizing it is not your job to continually rescue another person. A grown adult that lacks self-responsibility will never be an equal parter and instead is in need of a parent rather than a partner.

6. Not realizing the first time someone makes you cry should be the last time you give them the opportunity. It should be counterintuitive to watch someone you love cry. Crying is a submissive emotion. A spouse that induces crying is a bully.

7. Not realizing that you will have an out of control relationship with an overly controlling personality. Control is like selfish – if it’s extreme then these are just not team qualities.

8. If someone leaves you once, then give them your blessing so they don’t leave you twice. I know this becomes tough once a family is involved it pushes our limits; however, it’s a self-respect issue. Why would you ever want someone back who once turned their back on you? 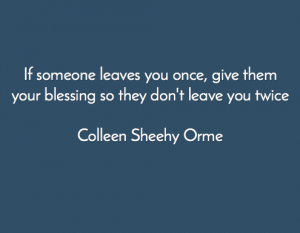 Do People Feel Sorry for You Because of Divorce?
archives most recent
More from Beliefnet and our partners
previous posts