What are your favorite Purim books?

Oh, and readers? There might just be a very special Purim related giveaway in your future. Stay tuned.

To help us all get in the holiday spirit, would you please share your recommendations for favorite Purim books for children?

To get us started, here’s a re-post of an interview I did last year with Eric Kimmel about last year’s release The Story of Esther. 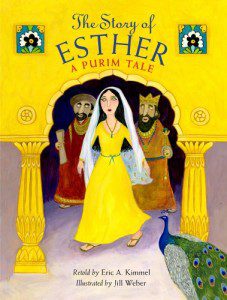 I love Eric Kimmel. You probably think I mean that I love his books. And I do love his books. But I also love him. I had the opportunity to interview Eric a few weeks ago about one of his latest books, The Story of Esther from Holiday House. We spoke on the phone for close to an hour, but I think I fell in love with him when he first emailed me with his phone number. “Call me tonight,” he wrote. “And I’ll call you back. I have free long distance.”

He is charming and smart and although he thinks like a writer (of course), he also thinks like a teacher. Which meant that our conversation was compelling and thought provoking for me. I came into our conversation fairly certain that children should learn Torah the way it’s written, with its simple language and sparse details, and no midrash mixed in. Eric feels differently. Read our interview to find out why.

I asked Eric what challenges he faced in writing a version of the Book of Esther for children.

You grow up with the story of Esther and Purim. It’s a lot of fun, but it’s a very problematical text. It’s not really a children’s story – it’s full of sex and violence. It would make a great video game. To prepare, I went back, I reread the story. The first thing you run into is that it’s very complex. I had to ask myself, “What do I want the reader to get out of this story? In times of trouble, have faith, don’t give up.”

I pressed Eric on some of the changes he made to the traditional text. For example, in his version, King Achashversoh reverses the decree that the Jews will be killed. (In the megillah, he cannot reverse the decree, and instead permits the Jews to defend themselves.)

You cannot be absolutely tied to the text or you are going to tie yourself into knots. The details start taking up paragraph after paragraph. So I made a choice – I didn’t want to end with a blood bath, I wanted to make it a story of faith. I felt I could easily get rid of the king’s decree. I also glossed over hanging Haman’s family – I think that’s a little strong. And what would the artist draw? I always ask myself – how essential to the story is it? I’m writing for children and I assume I have a reader who may not know the original story. So, I approach it as a storyteller. This is how I learned these stories – from grandmother, in Yiddish. She may have started with the text, but she read it a long time ago. We were all over the map.

He also talked about some of other “improvements” he made on the traditional story. Based, in part, on his experience with Playboy Bunnies. (Really.)

I loved watching Hugh Hefner’s show on TV – The Girls Next Store. The Bunnies look gorgeous until they open their mouths. So, I thought, how is Esther going to stand out? In my version, she is the one who doesn’t dress up so fancy. I decided to have her dress in plain clothes. The message is, be who you are. You don’t need the makeup and the plastic surgery and all that nonsense. The beauty comes from within.

Achashverosh finds she has brains and not just beauty. That’s why I didn’t make him a fool, because if he is, then Esther marrying him becomes almost unbearable. So I see him as well meaning, but overwhelmed.

You know what I’m doing? I’m writing modern midrash. Because midrash continues to the present day. We are constantly reinterpreting and reinventing these stories. They are not locked in stone. I want children to learn that the stories of the Torah are great stories – they stand with the best of them – Anderson and Grimm – and it all comes down to the story.

If you’re not already charmed, make sure to listen to Eric reading The Book of Esther aloud on his blog. You can almost hear him smiling while he reads it.

Eric Reads “The Story of Esther.” from Eric Kimmel on Vimeo.