The Long and Winding Road…that leads to Canaan

I’ve got a plan. And I need your help.

I love the seder. Note the use of the singular. I love one seder. Two? It’s a bit much for me. If you ask me, there’s a good reason that wasn’t part of the original blueprint for this holiday. (A second seder is a relatively late Rabbinic prescription for life in the diaspora.) But, I don’t live in Israel, and I’m not a Reform Jew, so two seders it is.

Usually the major differences between our first night seder and our second night seder are the menus and the guests. This year we’re trying something else. Inspired by a very musical shabbat dinner, when we sat up half the night (well, until, like 11) drinking wine and singing Beatles songs, I’ve decided to host a Beatles seder. What will this look like, exactly? I’m not quite sure. We’ll include the major have-to’s – you know, the four cups of wine, maror, karpas, etcetera…the fun stuff. We’ll certainly give Zoe a second shot at the mah-nishtana. But are we going to parse out every single syllable of “My father was a wandering Aramean?” Not so much. 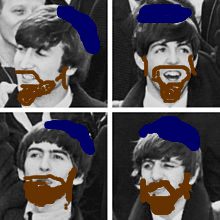 This year, instead of quoting Rabbi José (ok, Yosi. Whatever.) and Rabbi Eliezer, we are going to make midrash out of Rabbis Paul and John. (And maybe Rabbi George. But probably not Rabbi Ringo.) I’ve had some great suggestions via Facebook – “It’s Been a Hard Day’s Night” and “I’m So Tired” representing the slaves’ toil, and “Revolution” for the Exodus. I’m hoping you, dear readers, will have some more suggestions.

Yes, I understand that this seder strays pretty far from tradition. I get that it’s not what the Rabbis had in mind, and I know that for some readers this is a terrible idea. But, I’m comfortable with a non-traditional second seder. I’m looking for suggestions of Beatles songs, not suggestions for how to be a more halachic Jew, please.