Why is that baked potato wearing a tuxedo? A guest post from Edible Torah.

Thanks to Leon Adato for this guest post about a creative way to explore the weekly Torah portion with friends and family. 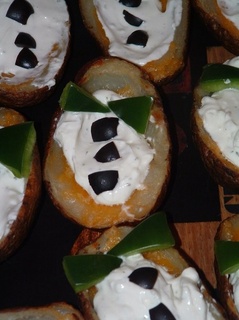 It seems like a lot of Jews today are looking for a way to connect with their religious tradition, but find it to be a daunting task. 3,000 years of information (oral and written) may be exciting to Rabbis and historians, but it’s just plain overwhelming to the average Joe (or Jew, in this case). More so, the challenge of making a meaningful connection to our ancient texts can be a stumbling block even bigger than issues such as dogma, spirituality, or daily practice.

Conversely, if people can connect to these central texts, it unlocks the door to finding a connection to Judaism as a whole. People are just looking for something familiar to hook onto, that can help them bridge the gap into a deeper understanding.

I stumbled across one such hook several ago which has become a family tradition of epic proportions.

It all started with my friend Naomi Chase. A gifted educator of Judaics as well as an insightful human being, she had a weekly Shabbat gathering of family and friends with the primary goal of keeping people connected. The group was big and none of us was exactly rich, so each week was pot-luck. The focus was definitely more social than religious. There was no attempt to study, or teach or encourage people to do or become something more than we were.

After the basic Shabbat blessings were said, Naomi would offer her opinion of the Torah portion. Occasionally a brave soul would pipe up with an idea or question, but for the most part the group was a passive participant in the Shabbat experience.

It wasn’t until Naomi made an off-hand joke about food assignments for the coming week. The portion was Toldot (Genesis 25:19 – 28:9). Naomi suggested the food we bring should be red. Nobody could figure out why until she explained that this portion included the moment when Esau, starving perhaps to death, trades his birthright for “some of that red, red stuff”

The group thought the idea was hysterical, and also intriguing. The items brought the following week betrayed our enthusiasm for this new concept. Rather than quietly listen to Naomi’s min d’var Torah, we were all eager to explain how each food was red, why it was red, what it had to do with the portion (at least our understanding of it).

Naomi, never one to let a teachable moment pass, conjured up a food assignment theme for the coming week. As she came up with more and more intricate assignments, the group was drawn in to her cunning web. We began to read about the Torah portion during the week, trying to figure out ways to not only fulfill the assignment, but top it in some way.

Seven years later, our group still meets each Shabbat. Naomi has moved to another state, so we get together at my house now. The Shabbat tradition has become the inspiration for a blog (www.edibletorah.com) as well as the joyful focus of our week. My wife and I joke that years from now our kids will come home on Friday afternoon to their spouse, who may ask “What’s for dinner?”. To which our kids will reply “How can I know what to cook? I haven’t even read the Torah portion yet!”

If you’ve read this far, you may be wondering about the title of this post and the accompanying picture. TO understand it, you have to read the dinner invitation for that particular week:

Rules rules rules. That’s pretty much the entire portion this week. Which made food assignments pretty tricky. Looking at some of the analysis for all these rules, we found that the Rabbis said the
restrictions are a way to make the everyday into the holy.

So, limited only by your creativity and the category of food which you have been assigned, please bring an everyday kind of food which can be dressed up and made special.”