I am that mean old lady 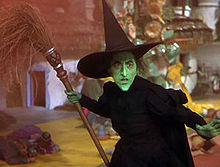 Today, I was the mean old lady I remember from my own days of loitering in the halls at shul. I went around telling kids in a stern voice (and an even sterner face) they were not allowed to run in the halls. I threatened to to tell their parents. And then I did go tell some of their parents. A little later on, I saw the kids hiding from me, whispering and pointing. Just like I did to that mean old lady when I was a kid.
If I’m going to be a shul stereotype for the ages, I think I’d rather be the Candy Man.