Keeping children away from bad influences. In synagogue.

Yesterday, my daughter Ella went to shul with me to attend a bat-mitzvah. (My younger daughter, Zoe, was home with 102° fever.) I wanted to see the bat-mitzvah girl read from the Torah, so we arrived significantly earlier than usual. By the end of the Torah service we both needed to take a break from the sanctuary, and since it was raining, we went for a walk in the halls instead. 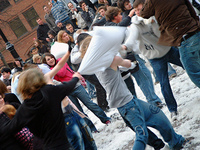 There were a lot of kids in shul, which is inarguably a wonderful thing. And it was obvious that they feel very comfortable in the building. Also a wonderful thing. In concept, at least. But I was actually horrified (and I’m not easily horrified) by the behavior I saw in the hallways. The kids were running, and I do mean running, through the halls of our small shul. Also shouting. And chasing, with some occasional crashing thrown in for good measure. Which invariably led to a little more shouting.
Ella found a group of her friends from school huddled in the coat room. She asked if she could join them if she promised not to run around. I was torn. I want her to enjoy her time at shul, and to see it as a place of community for her, and not just for me. So, I said yes. But when I came back out a few minutes later and saw a handful of kids pushing a few other children out the coat room door (“First graders only!” they hollered) I reneged. I told her that I didn’t want her out of my sight, because even thought she wasn’t doing anything wrong, I wasn’t ok with the way the other children were behaving. We ended up sitting on the stage in the social hall, reading books, and waiting for kiddush.
Last night at the Bar- Mitzvah party I complained to another parent about what I saw. “Really?” she asked. “I like seeing the kids have fun in the building.” I understood her point. We both had grown up belonging to, or visiting, large suburban synagogues where children needed to sit quietly in stiff, fancy clothes. We both sought out a small, progressive community like ours to escape many of those expectations. But still.
I understand that every parent has his/her own behavior expectations, and other people, especially those without children, are likely to raise an eyebrow or shoot a look when children, well, act like children. I have been the object of many a stare in the main sanctuary when my daughters whispered, or rustled paper dolls, or ate the many snacks I brought to keep them quiet, back in the days when I still tried to go to services.
My questions is, can a community develop a shared expectation for behavior and still be welcoming to families? And if so, how do we actually uphold (I wanted to say enforce, but I think I’m sounding enough like Nurse Ratched for one post) these expectations?
Yesterday was one of the first times I actually considered giving up our membership. I can handle shul being a little boring, or vaguely dissatisfying. But I’m not ok with it being a bad influence. So please, share your comments and suggestions. I’d love to hear how you, or your synagogue, or church, has navigated this tricky balance.
read next post

Hatikvah or not hatikvah. That is the question.
archives most recent
More from Beliefnet and our partners
previous posts