Helen Thomas – what would her mother think? 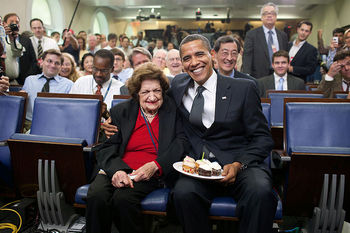 My daughters, who are very good friends, and are heartachingly kind to one another about 87% of the time, occasionally say insulting things to one another. (“Your tushy smells,” for example. Or, “I’m never going to be your sister again EVER for the rest of my life.”)

I know that sometimes my daughters are going to be mad, even furious, at each other. And I think it’s important to let siblings work out their own conflicts. But we also have rules. One of those rules is, “You can think whatever you want, but you can’t say mean things.” In other words, you are permitted to think your sister’s tushy smells. You might even be right. But keep it to yourself.
It’s not that I want my children to think unkind thoughts. But as a parent of five and six year old girls, I have already learned that I have a humblingly small amount of control over my kids. Trying to change their feelings is a waste of energy. Changing their actions? Well, at least I stand a chance, particularly if I mete out the right combination of bribes rewards and punishments. My hope is that if they spend enough time acting the right way, eventually they will also feel a way that makes me proud of them. This philosophy is likely an extension of my religious upbringing – Jewish law is focused on what we do, not what we believe. Do “it” (praying, saying blessings, observing shabbat, keeping kosher, and hundreds of other mitzvot) long enough, and the belief will take care of itself. Or maybe it won’t. But we keep doing it anyway.
Consequently, I believe that Helen Thomas is entitled to have any opinion she wants about Israel and the Jews. I even think she could have found a respectful and intelligent way to express her opinions. But telling Jews to go back to the countries that exterminated their ancestors less than a century ago? That’s just mean. And, Ms. Thomas, you keep those thoughts to yourself. Otherwise, you get a time out.