Last night, my daughters spent several hours acting out an ancient Jewish tradition, completely of their own accord. They gathered up ritual objects, recited brachot, bandied about Yiddish and Hebrew terminology, and mimicked practices described in the Talmud. When I interrupted their play to send them off to bed, they begged me to allow them to leave everything set up so that they could continue their game in the morning.

What amazing teacher, what brilliant programming, had inspired such love of Judaism in my children? That morning, they had attended their first Jewish wedding.
If you have never been to a traditional Jewish wedding (I didn’t attend my first until my mid-twenties) you are missing out on one of the things we Jews do best. This is no somber, formal affair, although there are indeed many poignant moments. Instead of stiffly toasting the wedding party, guests are obligated to bring joy to the bride and groom. How is this accomplished? Imagine a roomful of people of all ages wearing crazy hats and costumes, doing wild dances and acrobatics, tossing confetti, spraying silly string, and hoisting the bride and groom in the air on chairs. I doubt my daughters have ever seen adults having so much fun.
I learned something from my daughters’ reaction to the day. Like other Jewish events we attend, or create at home, not every single part was appropriate or engaging for children. There were times that they were bored, times that they were kvetchy, and times that they wanted to go home. But there were a few factors that made it a stand-out occasion for them:
1. Simchah – the Hebrew word for joy. Everyone in attendance fully expected to derive joy from the event, and everyone was equally committed to contributing joy to the event. Can you imagine if everyone came to Shabbat services with that approach?
2. Time spent doing, not watching. While there were, of course, many parts of the service that were conducted by the Rabbi, or actually, Rabbis – there were heaps of them, including the bride – and meant for the adults, there were lots of opportunities for meaningful participation on the part of children. Not only were my daughters flower girls, but they were in the thick of the merriment and dancing. They had important jobs to do, and as you can see, Zoe, in particular, took the mitzvah of entertaining the bride and groom very seriously. 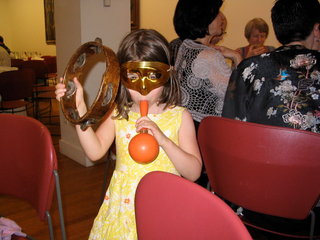 3. A core of knowledgeable participants. There were enough people in attendance who knew how to “do” a Jewish wedding. A majority of us already knew the rituals and the songs, and came armed with plenty of shtick to share. This was one of the trade-offs when I left New York City for a smaller Jewish community. There’s a limited amount of ruach even the most skilled leader can muster at any service or ceremony when only a few people really know what’s going on.
Life is not a bowl of cherries, and the practice of Judaism can’t be just an endless series of weddings. But as my daughters begin what I hope will be a lifelong relationship with Judaism, I’m grateful they had a taste of such sweet, sweet cherries so early on.
Mazel Tov Chuck and Allison! 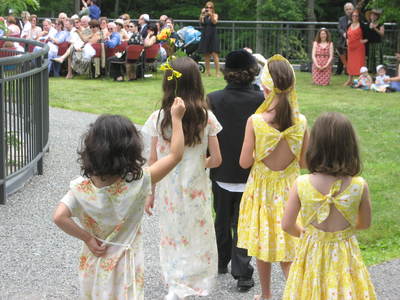 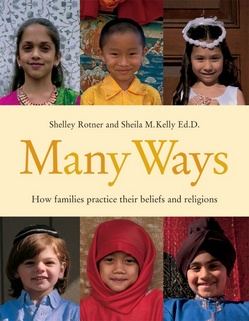