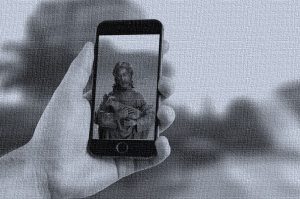 Church attendance in the U.S. is declining. Fewer people identify as religious and fewer of those who still do attend church. Don’t take my word for it. See this poll from Gallup.  This shift is also clearly generational.

The universal panacea for generational disaffection and engagement today? More Tech! So, we are overwhelmed with social media hooks, lines and sinkers. Hear the Gospel is just as guilty as the next in contributing to this noise.

But how effective a substitute is this?

Here’s a link to a well-done YouTube video from a while back that attempts to imagine what a #Jesus text experience might have been like in the time of Christ. https://www.youtube.com/watch?v=S-hW680pCLs

If Jesus were to call you on your mobile phone would you pick up or let it go to voice mail because you only respond right away to text messages from people you know?

There are purportedly humorous Twitter feeds that attempt to create what Jesus might Tweet now if he had a social media account. https://sojo.net/articles/what-would-jesus-tweet  One of these Jesus named accounts has almost 800K Followers but only Follows one account: Pope Francis. Go figure. (I don’t think Jesus needs to Follow anyone to keep tabs on them.)

I like Theresa Merrill’s Linkedin post https://www.linkedin.com/pulse/20140617105450-43645946-if-jesus-used-social-media-how-many-followers-would-he-have/ that reminds us that Jesus only had 12 disciples, not 800K, and seems to have done fine in terms of getting the message out. It’s quality not quantity of Followers that truly matters.

Wary of the Stranger

Hear the Gospel receives “—— now Follows You” notifications on Twitter. Good practice says I should follow them back. But I have a confession to make. Some of those Followers come from the most remote places on earth (apparently where there is internet access available.) They may have made only one or two Tweets, they profess a faith in Jesus in broken English, and have so few followers they can all be counted on one hand.

After years online, I have been conditioned to be wary of the stranger. Who is this person?  Who else do they follow?  WHO FOLLOWS THEM? Will they attempt to DM if I begin to follow them? Are they Phishers rather than Fishers of People?

So, often I do not Follow them back. And I feel bad. Afterall, where did Jesus come from if not from a small remote village in Galilee? How many Followers did he have when he began his ministry? How many Liked what he had to say? I wish I were braver.

Even though there’s a Tweet storm of content out there, in this era of email, Tweeting, texting, and image posting, I think it’s harder than ever to really hear and connect with the Gospel.

The NSRV and all its contemporaries are usually heard only in the fewest number of verses each Sunday necessary to meet the minimum requirements of the lectionary. And things are even more crowded on social media. Posts are terser than fortune cookies. There aren’t enough characters in a Tweet to list all the Beatitudes or recount a full encounter with Jesus. What we are offered is T-shirt Gospel.

And each hopeful meme, desperate to go viral, is almost always a quote.  What Jesus would say.  But the bumper sticker rightly asks, “What would Jesus do?”  Not what would he say. And I want to believe that what Jesus would not do is Tweet. Tweeting debases or is at best a mockery of compassion.

The Presence of the Lord

The crowds were drawn to Jesus. They wanted to see him, be near him, hear him and touch his robe. Online presence is something entirely apart from physical presence. There is no comparison between actual witness and forwarding a text, posting an image, sharing or re-Tweeting a post.

Encountering the risen Christ is verified by touching the wound, not receiving a text or seeing his picture posted on Instagram.

Jesus asks Peter to “feed my sheep.” Give them the bread of life. God with us, not visit God’s home page.

I think the Pharisees would have texted like mad if they had the opportunity. I think the Romans would have posted all kinds of propaganda. But I think Jesus prefers the human touch. The human voice. An experience, not a notification. 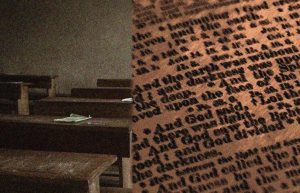