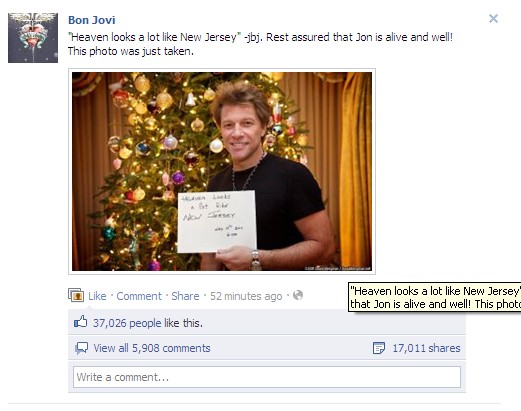 Rock fans and women around the world are breathing a collective sigh of relief: Jon Bon Jovi is not dead. Despite rumors of his demise, the charming rock legend is alive and well.

It appears to have started with a fake blog post reporting that Bon Jovi suffered cardiac arrest. However at a little after 7:00 PM, this photo was posted on the official Bon Jovi band Facebook page, with the status update, “‘Heaven looks a lot like New Jersey’ -jbj. Rest assured that Jon is alive and well! This photo was just taken.”

The news did give the Twittersphere an opportunity to have some fun at the rocker’s expense:

@Scott Nevins – “Just to clarify: Jon Bon Jovi did NOT die but Kim Jong ll did. I can see how people could be easily confused…”

@ScuzzTV – “Jon Bon Jovi cannot be killed by conventional weapons. Also, don’t get him wet or feed him after midnight.”

And this tweet, which sums up the impact social networking has on pop culture:

@jonpyle – “What does it say about news that when I saw someone post that Jon Bon Jovi was dead, the first place I went to verify was Twitter.”

On tonight’s The X Factor results show, Melanie Amaro, Josh Krajcik and Chris Rene went through to the next round and Marcus Canty was sent home. OK, OK, I know, I know. I ‘ve been hard on Marcus Canty the last few weeks, so you may be thinking that I’m happy he went home tonight. I […]