I hope you had a chance to catch gospel music artist Israel Houghton this morning on “CBS Sunday Morning.” The profile was part of the show’s Easter Sunday coverage, which also featured CeCe Winans and Patty Griffin.
I had a chance to talk with Israel Houghton last year at GMA. I thought I’d share that story with you; this originally appeared in the December 2009 issue of the Christian Voice Magazine: 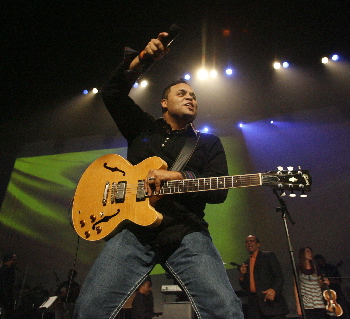 Worship leader Israel Houghton is running late for our interview. That’s not unusual during Gospel Music Week, when artists and industry pros get together with media to promote their latest projects. Interviews run over, people stop in the hallways to network, and things can get a little behind schedule.
But that’s not why Houghton is late. His 12-year-old daughter Mariah, back home in Houston, needed to talk to him and so he took her call before coming to our interview.
This is a man who clearly has his priorities straight.
In a Christian culture where the lines are often blurred between spirituality and consumerism, where “worship” is now a genre of music, Houghton has been able to balance success and faith while keeping his eyes firmly on Jesus.
Houghton is the worship leader at Lakewood Church in Houston, TX, where famed author and speaker Joel Osteen is pastor.

As part of the group Israel and New Breed, he’s also found commercial success. The group received Dove Awards for “Contemporary Gospel Recorded Song” in 2006 and 2007; their Alive in South Africa, recorded live in Cape Town, received a 2006 Grammy Award for “Best Traditional Gospel Album” and their A Deeper Level took home the 2007 Grammy for “Best Pop/Contemporary Gospel Album.” They’ve also garnered two Stellar Awards. This past March he released his solo album, The Power of One, to critical acclaim.
But the attention isn’t just from the Christian industry. Israel and New Breed accompanied Alicia Keys at the 2007 MTV Video Music Awards and performed at the 50th Annual Grammy Awards, alongside the likes of Aretha Franklin and BeBe Winans, taking part in a segment saluting Gospel music.
Hundreds of thousands of people around the world have been touched by his worship music, a mix of gospel, jazz and rock; but the success hasn’t gone to his head. Houghton credits his family for keeping him grounded. 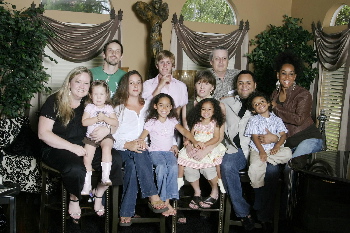 He and his wife Meleasa have been married for 15 years and have three children, 12-year-old Mariah, 7-year-old Israel (whom they call Sonny Boy), and 5-year-old Lillie. “My primary ministry is the church that I pastor, and it has four members in it,” Houghton says of his family. “I don’t leave home to go help other people live if I’m not modeling that in our home setting.” His family often travels with him; the kids are home schooled and while it can be a crazy, dynamic life – sure, he admits, the kids sometimes go to bed at 11:30 PM or run around the tour bus having fun – he wouldn’t have it any other way.
Christian music has been at a bit of a crossroads in recent years and worship music with it. It took a while for Christian music record sales to fall, for example, but they’ve started to tumble like the rest of the music industry. At the same time, Christian artists are finding success with their songs on TV and in movies, and bands are crossing over into mainstream like never before.
And with that, the definition of Christian music has changed. Where worship, for example, was once something Christians did away from the public eye, worship music has taken the act of praising God into the world, on stage and on the radio. And that’s OK with Houghton.
“Gospel in its definition is good news,” he says. “And I think we’re living in a time where we hear a lot of bad news, we hear a lot of what’s wrong with the world. And I really enjoy that I get to be a part of the sliver of the industry that is all about giving hope, encouragement and good news to people.
“Regardless of your belief, regardless of your religious affiliation, I don’t care if you’re an atheist, an agnostic, I don’t care. We could all use good news.”
For Israel and New Breed, that good news comes in the form of not just uplifting music, but get-off-your-feet-and-dance music.
He talks about the people who tell him that his music is part of their morning routine, getting up, getting ready for work or school, and as part of that routine, listening to upbeat, encouraging music. “As a worship leader,” he says, “I feel this sort of responsibility to help add to the soundtrack of people’s day.”
At the same time, he does have to deflect occasional misplaced attention from music fans. “I take out the trash on Wednesdays, I’m a regular dude,” he says. “And yet someone will come up and collapse in my arms and say, ‘You don’t know what you’ve done for me.'” He takes time to help them “unpack” those emotions, and usually what he finds is that what the person is trying to say is that one of Houghton’s songs helped him connect with God or put into words something he’s wanted to say but hadn’t been able to before.
Helping people connect with God is just part of what worship means to Houghton. As part of a lifestyle of worship, it also means reaching out with compassion to people in need.
Houghton was part of the 2008 Compassionart project, which brought together a dozen of the industry’s most successful artists for a week long songwriting retreat in Scotland, with the goal of writing songs that would generate revenue for charity. The artists, producers, managers and other industry folks involved all gave up their royalties so that the songs would continue to generate as much money as possible for a variety of causes selected by the artists, in perpetuity.
The hope, of course, is that the songs are successful and generate a lot of money for charity. But buying and listening to worship music isn’t what worshipping God is all about.
Houghton believes that what the church really needs today are people who are not “just trying to get the buzz of another great worship experience.”
“Worship can help point the way to God,” Houghton explains, “and God helps point the way to what’s going on in His heart … Let’s not just have this great tingly worship experience and then go, ‘OK, so where are we going to eat right now?’.” He says we need to ask ourselves, “I’ve gotten this close to the heart of God; what can I do with this, what kind of action can I take?”
“I say to people all the time, ‘Some of the most hurting people I know go to church with you, and they sit on the same row as you.’ So you don’t necessarily have to cross the ocean into India or Africa to truly change the world. Sometimes you’ve just gotta look a few seats down your row and be a part of changing that world.”
You can learn more about Israel Houghton on his website.
RELATED POSTS:
Israel Houghton answers the question, What is Christian music?
Christian music artists release CompassionArt: Creating Freedom From Poverty
More posts about CompassionArt
Got a gospel or Christian music news tip? Send me an email!
Click here to subscribe to Gospel Soundcheck by email and have the Gospel Soundcheck headlines delivered daily to your email inbox. And don’t forget to follow me on Twitter!
read next post
Israel Houghton and CeCe Winans on CBS Sunday Morning this Easter Sunday
archives most recent
More from Beliefnet and our partners
previous posts