Part 2 Of My Interview with Derek Webb: Cursing In Songs, Homosexuality 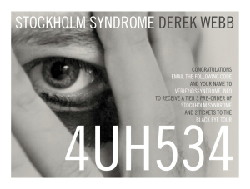 In Part 2 of my interview with Derek Webb, he addresses why he chose to curse in the song “What Matters More,” and what, if anything, he has to say about homosexuality.
Unlike Part 1 of the interview, I won’t be able to post the audio. My dogs were barking nonstop during most of this 15 minute portion of our chat (and barked again nonstop hearing themselves barking). Scout and Bandit apologize. But I’ve shared a good amount of Webb’s answers; hopefully one more post will finish off the interview!
My first question: in addition to the cursing, why pick the topic of homosexuality, one of the major sins in American Christianity, to write a song about? It’s such a hot topic.

I guess it is. Maybe it should be, considering that according to the Barna Group over 90% of non Christians in our American culture hear the word Christian and think “gay hater”. So maybe it’s not a big enough topic, if you’re asking me.
Or maybe the discussions we’re having about it are not nuanced enough. When I think about that statistic, it does make me want to curse a little bit. I’ll be honest with you. And it should make any follower of Jesus really concerned with the things that he prioritized in his life on earth maybe want to curse as well.
The reason that I brought it up is because it’s really personally important to me. My best friend is homosexual. That issue, in fact, probably for the last almost 10 years, has been a major issue for me that I have been concerned with, and I have been concerned with the way the church deals with it and I’ve been concerned as I watch the church fumble a little bit in dealing with it.
And I have always felt as though there would be a moment when I would need to speak about it. And I would need to basically say what I can say without alienating myself too much from the people who I hope are listening to me.

Webb adds that the song “What Matters More” needs to be taken in context with the rest of the songs on the album.

The thing to remember is that I’ve never been an artist who makes a record full of 10 singles. I mean, I tend to make records and write songs that live together on albums. I don’t regret leaking that song early and getting that out and the way by which we did it especially considering the gun we were under from the label, then telling us we couldn’t put it out. At every kind of intersection we did the thing that we thought was best. But I do kind of hate that because it got out early that there has been this focus on the one song out of the context of the rest of the songs.

What about that reference to Tony Campolo’s speech?

Anyone who thinks that I don’t know about Tony Campolo’s famous speech 10 or 20 years ago isn’t really giving me credit.
The thing is that when he did it, it was just as effective as it is today. Basically what you’re doing is you’re taking something that is at best peripheral to the moral priorities of a group of people, at BEST peripheral, but those people, because they tend to elevate to primary and they scoot all the primary things out of the way to make room for it, they react to it.
Here’s the thing. Words are tools for me. I mean, I’m a writer. So I am constantly looking, and as a follower of Jesus there’s even a further nuance to it because I’m also in the restoration business. So when I look at words and I look at the tools I have as a writer I’m looking for ways to take things that are broken and use them constructively and redefine, reuse them for good. Like Judo. I’m looking to take the energy they have and redirect it to something that can actually turn the thing on its head and use its own power against it. And I feel like in this instance this is an example of me trying to use my tools well.

What about the incredible amount of publicity the song “What Matters More” has gotten already? Webb muses …

Are we offended, are we outraged by the right things or the wrong things? When the Christian blogosphere lights up like a Christmas tree when a quote Christian singer uses a word like that in a song [referring to the word sh*t in the song “What Matters More”], and yet, again, 8500 people die every day from lack of clean drinking water in sub Saharan Africa alone. It’s like the Twin Towers fall three times every day like clockwork and that’s not even on the front page. Where are the Christian bloggers outraged and offended by that?

Not that he doesn’t see Christians and bloggers who do tackle those subjects and tackle them well. But …

I’m just saying, isn’t this an interesting example of the fact that you call upon a trigger like this and you use it in this way and it proves the point all the more. Because look at all these people coming out of the woodwork. I mean, I would love to see that same spirit, that same energy directed into the things that I think might have been closer up to the middle of the priority list of Jesus.

If you are not compelled to be in a relationship – like a loving relationship, like a friend, somebody who you really care about, and I don’t mean like a token, I mean somebody who you just naturally in your life you’re living life in such a way that you encounter and engage with and become friends with and enter into a relationship with people who are not like you and don’t believe the same things as you – if you’re not doing that, you need to be doing that.
But if that’s not you, and you don’t even know or go near or have any idea about gays or lesbians, then I would wager that you might not be really qualified to speak too much about this.
I’m not saying it’s going to change your moral conviction. That’s not my concern so much. My concern is the way that moral conviction comes out of your mouth. The way your theology becomes ethics and expresses itself coming out of your mouth. I mean, that is SO much of the battle we’re fighting.
So people might be curious to see that nowhere on this record have I said anything about the morality of a lot of these issues and the black and whites of it. I don’t think that conversation even needs to be had. I am more concerned with, How are we using our voices, and how are we using them wrongly to alienate people in ways that I think are not only inappropriate but completely counterintuitive in terms of the message that we’re trying to speak

Webb reiterates that he doesn’t have an agenda, he isn’t on some crusade, and he isn’t trying to push any message onto anyone.

This is the sound. This record is the sound of me using the resources that I have, the tools in my hand, art, music, melody, lyrics, to create a barricade between people in my own community who hate and are spewing hate language all over the people who I love. That’s what “Stockholm Syndrome” is. It’s the sound of me using myself and my art as a barricade between the people I love and the people who hate them in my own community. That’s what this is. And it’s nothing more and it’s nothing less. I don’t want people to think I’m hear to lead some kind of crusade. I’m certainly not.

In our next part, we’ll hear his thoughts for those Christians who are tired of being counted among the haters and think Webb may be painting with too broad a brush. And we might be up to Webb’s comments about Fred Phelps and why he wrote a song about him.
You can check out Part 1 of my interview with Derek Webb at:

Part 1 Of My Interview with Derek Webb; Talking About Controversy and Record Sales
VIDEO: Are Derek Webb’s “What Matters More” Video and Lyrics Explicit? You Decide
Click here to subscribe to Gospel Soundcheck by email and have the Gospel Soundcheck headlines delivered daily to your email inbox. And don’t forget to follow me on Twitter!
read next post

Cooking With Christian Music: One Pot Chili From MIKESCHAIR's Sam Tinnesz
archives most recent
More from Beliefnet and our partners
previous posts