I read a blog today that likened American Idol contestant Norman Gentle (known in real life as Nick Mitchell) to Season 6 contestant Sanjaya Malakar.Maybe you remember the admittedly cute but woefully untalented singer who was kept in the competition week after week while singers who could actually sing were sent home, thanks to the frantic voting by hormone-crazed tweens. We never knew what we were going to get with Sanjaya, from horrible vocals to bizarre clothing and hair, but those of us older than 13 knew it was terrible.And while I suppose I can see where someone might question whether Norman Gentle is this season’s Sanjaya, the thought can’t stay in your mind more than millisecond, for a few simple reasons:1) Norman Gentle has talent. Despite the goofy clothing and the theatrics, Nick Mitchell actually has a very good voice.2) Nick Mitchell is very open about his desire to entertain people and make them laugh. He takes himself seriously only in that way; Mitchell understands that what he’s doing isn’t pop star material. Norman Gentle is purely entertaining musical comedy. Sanjaya, on the other hand, actually was trying to be a pop star and ended up looking ridiculous. There is a difference.3) In fact, I’d go so far as to say that Norman Gentle is brilliant. Mitchell has been able to use his talents both as a singer and comedian and pair them together in a way that makes fun of himself and the whole Idol process, and yet forces us to take him seriously because of his talent. We don’t mock him because he’s a caricature, we love him because he’s a caricature.If I had to pick a “Sanjaya” in this competition – and I use that analogy very loosley – so far I’d have to say it’s Adam Lambert. And I say that with a heavy heart, because Lambert has a great voice and he’s adorable. But where Norman Gentle is weird and exaggerated on purpose, Lambert is just being himself and in the end, I think that makes him the bigger joke. Get the Gospel Soundcheck headlines delivered daily to your email inbox. Just sign up for the RSS feed by going to the “Subscribe” box on the right hand side of this blog and entering your email address. Follow me on Twitter! 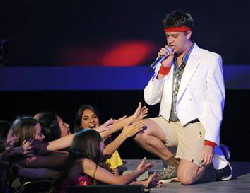