Bill Gaither and Cracker Barrel team up for new CD 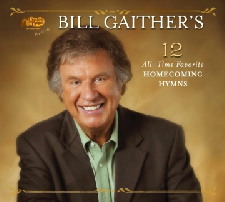 Cracker Barrel Old Country Store is offering customers an exclusive new CD featuring 12 hymns personally selected and sung by Southern gospel legend Bill Gaither and special guests.
“These songs of faith, many of which I fell in love with as a kid, are just as solid and true today as they have ever been”, said Gaither, “and they will keep holding true for the days to come, no matter what the future holds!”

The album, Bill Gaither’s Homecoming Hymns, features songs like “God Will Take Care of You” (with The Oak Ridge Boys); “Yes, I Know” (with The Gaither Vocal Band); “Amazing Grace” (with Russ Taff & The Booth Brothers); and “Rock of Ages” (with Reggie Smith, Joy Gardner, Stephen Hill & Vestal Goodman).
Bill Gaither has won 28 Dove awards and four Grammy awards. In 2000, Bill and his wife Gloria were named the first-ever Christian Songwriter of the Century by American Society of Composers, Authors and Publishers (ASCAP) .
Bill Gaither’s Homecoming Hymns is the latest project in a collection of exclusive music available only at Cracker Barrel.
read next post
Jeremy Camp is Speaking Louder, on his album and in our interview
archives most recent
More from Beliefnet and our partners
previous posts