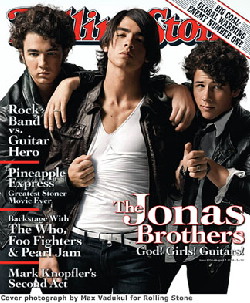 1) You risk life and limb when you come between an 11-year-old and her favorite pop star. I was called lame, a hater, gay, jealous, stupid and told to shut my dumb mouth. And those are just the comments from pre-teens that didn’t contain four letter words. At least I’m in good company. Chicago Sun-Times columnist Jim DeRogatis, who kindly referenced my blog post in his column, also took a beating from JoBros fans.
2) The youth of America couldn’t spell their way out of a dictionary factory. From accusations that I wish I was as “famouse” as the Jonas Brothers to variations on words like wat (for what) and sumthing (for something), I needed a teen dictionary just to get through some of the comments. Has anyone has ever explained to these jr. highers the difference between their, there, and they’re?
3) The vast majority of young people don’t know how to formulate a persuasive argument. A few did a great job of going point by point to show me what an idiot they thought I was, and they did it respectfully and calmly. The rest only TYPED IN CAPS, called me names, used curse words, and basically ranted and raved about how HOTTTTTT the Jonas Brothers are and how STUPID I was. Can someone please teach these kids how to share an opinion without resorting to yelling? (Just a thought: since school is starting up again, this would be a great writing exercise for English class. Take my original post and have students write an essay either agreeing or disagreeing with me. If you’re a teacher and do that, let me know. I’d love to see how that works out.)

4) Despite the fact that I was roasted for suggesting that the teen magazines’ constant coverage of the guys as sex symbols was in conflict with their purity rings – something I never said the boys were guilty of doing themselves, but there’s no question the magazines print what sells, and today it’s sex – more than a few teens actually understood my point. That makes me optimistic that some JoBro fans actually think about their media choices and the effects that media can have on them.
5) Somewhere in the media hype, more tweens than I thought get the connection between the JoBros and God. They might not fully understand the gospel, but the band has opened the door to at least be able to share the message, if the mainstream media ever gives them a chance.
In any event, just to clear the air: I don’t hate the Jonas Brothers. I hate what the industry is doing to them – running them ragged, exploiting them, treating them like a commodity. And I hope that they come out on the other side intact, and aren’t sacrificed on the altar of the record industry’s almighty dollar. I appreciate that they’ve been able to not only get the attention of, but develop relationships with, folks like Ellen DeGeneres. If three teen guys can use some bubble gum pop music to tell people that God loves them, well then, I’m behind it.
But I will be praying for them. The music industry is as harsh a mission field as any African desert.
RELATED POSTS
Joe Jonas, Taylor Swift, Camilla Belle and the mixed message of celebrity romance
5 things I hate about the Jonas Brothers (commercial empire, that is)