The Demise of Detroit: A Dr Suess Inspired Godonomics Poem

THE DEMISE OF DETROIT

My wife grew up under the great political promises of prosperity from Michigan leaders.  We spent our wedding night in Detroit almost twenty years ago before flying out on our honeymoon. The city was much larger, more prosperous, less bankrupt, and less “bull-dozed” in those days.  Michigan has been a case study in the ability of government interventionism to act like a parasite on the host of a great collection of individuals.   While many wise people “saw danger coming and warned of a different path,”  the “fools kept going” and now many “are suffering for it.”  (Proverbs 22:3). When many liberals convert to conservatism, they can summarize their journey with one word, “Detroit!”    As I describe in my book Godonomics, I took my son to the Henry Ford museum years ago to let him see a time when Detroit was the center of free enterprise, innovation, and job creation.   That day, Lego was putting on a display involving a giant lego Grinch.   We laughed as I explained to him that the Grinches that stole Christmas from Detroit were the corrupt and inefficient politicians that stole liberty, productivity, and generosity from the great people of Michigan.    The image was stark but true as the Grinch hovered over Henry Ford. 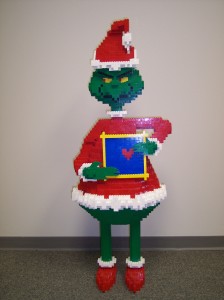 Reminds me of my favorite Dr Suess poem about the city of Hatch Hatch.  They had a town bee that wasn’t working hard enough, you see.  So they hire a bee watcher to watch the town bee.  The bee of Hatch hatch doesn’t work much harder, well, at least not Match; so they assume the bee watcher isn’t watching well enough. They hire a bee watcher, watcher.   So, as the pages turn, a bee watcher watcher, watches the bee watcher who watches the bee.  At the end of the day, you have lots of bee watchers, oversight, and regulation, but the bee never does work much harder.  This is the tale of the demise of Detroit:  Lots of regulation, bureaucracy, and inefficient programs and laws promising to bring jobs to the state.   Never did the bee watcher watchers dare to question their original assumptions and remove their good intentioned gluttonous oversight.  Free enterprise and limited government can be traced back to the building blocks of capitalism that God gave to Moses including private property, the rule of law, incentive, hard work, and a healthy skepticism toward centralized government and control.    Since Detroit is declaring bankruptcy, I was inspired to write a poem about the demise of Detroit inspired by Dr Suess.

In a place called Detroit, where the politicians were sleazy,
There lived powerful leaders who took life quite easy
They feasted and feasted like pondiverous pigs
When it came to decisions, they could zag and zig

They had eaten themselves out of houses and home
Run up their credit cards buying fliverous floam
They were overspending EACH YEAR by millions, I mean billions
They told us not to worry, ” at least it wasn’t zillions”
They told the concerned citizens of the prosperous town
And they’d come up with a plan to turn things around.

We’ll start eating less by cutting our feasting back
But we’re sooo concerned about what you’ll then lack
So, we’ll “cut” by eating more, but less more than we’d hoped
A citizen shouted out, “Your thinking’s been doped”

“Pigs don’t get leaner by eating more,
They can’t get cleaner, by rolling mud in their pores
There’s one simple solution to the problem of how
You MUST eat much less, and you MUST do it now”

A pig stood to respond, with his snout taking a whiff
If we stop eating now, we’ll all fall off a cliff…
This fearful term put the town in a mood
Until the pig made a suggestion, “Why don’t you give us your food”

“They didn’t spend less, in fact, they spent more
They withheld all the details because” they were such a bore”
The pigs kept eating and thought it was funny
That they’d saved the town from trouble, by taking their money

The town sighed a big sigh, until reality hit

And bankruptcy came, and caused such a fit,

The leaders had a new solution they started to spout
We’ll ask other States to bail us all out,

Detroit’s problem was spending, so why didn’t they cut
Thinking borrowing beats budgeting is a kick in the butt
The borrower is enslaved to the lender, that’s true,
Capitalism is not just a good idea, It’s God’s idea too.

Ayn Rand and Jesus: Do they teach opposing viewpoints about economy?
archives most recent
More from Beliefnet and our partners
previous posts