The May 21st Rapture and the Televangelist’s New Clothes

In the fable of the Emporer’s new clothes, a snake oil salesman talked the leader of the country into walking around naked in these fantastic new invisible clothes.  Only those who had faith could see them. As the rumor spread through the empire that the faithful and honorable could “see” the invisible clothes, everyone was suddenly admiring the king’s wonderful new wardrobe.  These salemen charged the Emporer for this beautiful new birthday suit.  They ran off rich while the Emporer was finally confronted by a child who noted that he was naked.   Out of the mouth of babes.

This month Harold Camping tried to dress his followers up in God’s invisible new clothes.  he spun a web of math and faith that combined Nostradomas and Rainman.  He convinced many to buy his new clothes before May 21st.    Now that he and his ministry are rich and raking in the dough, he has an explanation for the “seeming” error of his predictions.   He came out today and reported that the rapture occurred last weekend in an “invisible” way.  Only the faithful saw it.    Hmmmm…..    Oh, I forgot, he double checked his math again too….   Turns out that he forgot to carry the “1” which resulted in….  Well, ur, um….  it’s very complicated for mere mortals to understand, but the bottom line is… Um…   The real rapture…   I mean the non-invisible rapture will be in October…   That is, er, um, unless, it is another nonmaterial, invisible Casper-the-friendly ghost type event that only Harold can see from his million dollar ministry with his special decoder ring. 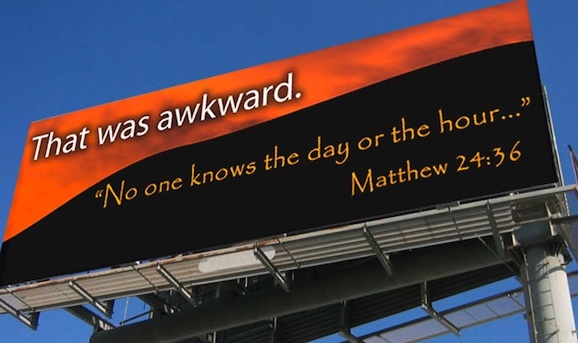