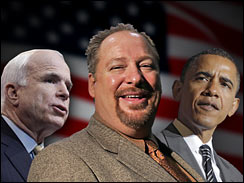 Team Obama was depending on John McCain, with a reputation for opting out of discussions about faith and hot-button issues, looking like a fish at a water at last night’s Saddleback Civil Forum (here’s the video). Didn’t happen. Not by a long shot, One of the big surprises of the evening was that McCain shone.

The other big surprise was the the forum was that it hung largely on the hot-button concerns of the old Christian Right rather than the new agenda items of the supposedly post-Christian right evangelicalism. It was a poignant reminder that despite all he media hoopla about a burgeoning evangelical middle and left, culture war issues like abortion, gay marriage, judges–and culture war-related items like school vouchers, the right of faith-based organizations to discriminate in hiring, the war on terror–still hold a special place in the hearts of evangelicals.
How can you tell? Just watch for the biggest applause lines of the event. They come in response to McCain’s conservative statements on culture war issues.
It wasn’t supposed to happen that way. Look at this description of the issue areas from Saddleback’s press release about the issues the Saddleback forum intended to cover:

“The primaries proved that Americans care deeply about the faith, values, character and leadership convictions of candidates as much as they do about the issues. While I know both men as friends and they recognize I will be frank, but fair, they also know I will be raising questions in these four areas beyond what political reporters typically ask. This includes pressing issues that are bridging divides in our nation, such as poverty, HIV/AIDS, climate and human rights.”

Poverty. HIV/AIDS. Climate change. Human rights. The purported agenda items of the post-Christian Right evangelical movement. But they didn’t get much air time last night. That gave McCain an open to rack up major points on topics he usually shies away from, with zingers that included a wish that Ginsberg, Stevens, Souter and Breyer would have never been appointed to the Supreme Court, a terse, unequivocal pledge to preside over a pro-life White House with pro-life policies, and a full-throated condemnation of the California Supreme Court decision legalizing gay marriage. Those lines brought down the house.
Obama got points for showing up in the lion’s den, making it a lot harder for Christian Right leaders to demonize him, for expressing great sensitivity to evangelical concerns on issues ranging from abortion to embryonic stem cell research, and for talking openly about his Christian faith. But God-o-Meter wonders whether Obama was caught off guard by the fact that Warren’s questions were largely plucked from the conservative playbook. That’s what gave McCain the opportunity to remind conservatives he’s one of them–and God-o-Meter occasion to wonder if evangelical conerns have changed a lot less than the mainstream media would have us believe.

read next post
With Video, McCain Has Some Evangelicals Believing He's One of Them
archives most recent
More from Beliefnet and our partners
previous posts