A short interview Barack Obama gave last week to the evangelical Relevant magazine has been making a lot of headlines, specifically over what he said about supporting abortion restrictions:

“I have repeatedly said that I think it’s entirely appropriate for states to restrict or even prohibit late-term abortions as long as there is a strict, well-defined exception for the health of the mother. Now, I don’t think that ‘mental distress’ qualifies as the health of the mother. I think it has to be a serious physical issue that arises in pregnancy, where there are real, significant problems to the mother carrying that child to term. Otherwise, as long as there is such a medical exception in place, I think we can prohibit late-term abortions.”

What’s been surprising about the blowback Obama’s received over the remarks is that–just like criticism he received last week over his proposal to bolster President Bush’s faith-based initiatives–it’s come almost entirely from the Christian Right. NARAL actually released a statement backing Obama:
According to the AP, NARAL Pro-Choice America released a statement expressing complete comfort with Obama’s remarks:

“Sen. Obama has consistently said he supports the tenets set forth by Roe, and has made strong statements against President Bush’s Federal Abortion Ban, which does not have an exception to protect a woman’s health.”

But pro-life groups say Obama is being disingenuous, trying to obscure his adamant pro-choice position as he reaches out to evangelicals, Catholics, and other culturally conservative religious voters. Says the Family Research Council:

…[Obama’s] co-sponsorship of the federal Freedom of Choice Act (FOCA) shows his unwavering support of abortion on demand. He went as far as telling a Planned Parenthood audience “the first thing I’d do as president is, is sign the Freedom of Choice Act.” FOCA would not only codify Roe v. Wade into law it would also successfully overturn numerous state laws that have been passed over the years to protect children and parents.

Other pro-life groups say Obama’s opposition to “mental distress” qualifying as a health exception for abortion bans represents a major change in the Democratic Party’s approach to abortion rights and constitutes a depature from 1973’s Doe v. Bolton case–issued concurrently with Roe v. Wade–which identified emotional and psychological health considerations as valid reasons for women seeking abortions.
Protests from pro-life groups notwithstanding, Obama is seriously changing the Democrats’ rhetoric on abortion. What God-o-Meter is interested to see is whether that shift wins over moderately pro-life voters or whether they, like the Christian Right, dismiss Obama’s new approach to abortion as mere obfuscation. Obama is muddying the waters on his abortion stance, but God-o-meter is confident that questions from the news media will force him to clarify his stance, especially on abortion restrictions that fall short of constituting outright bans on the procedure. 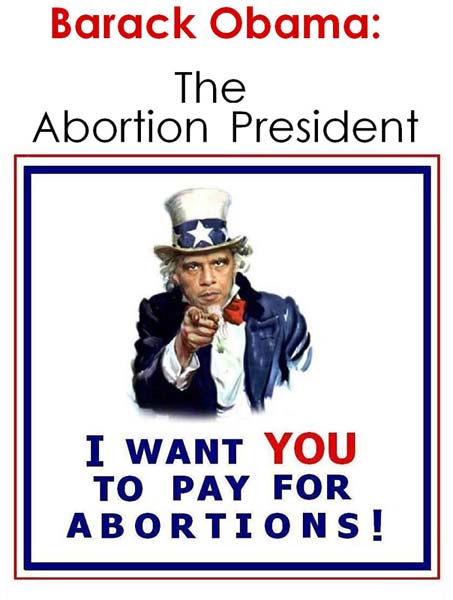