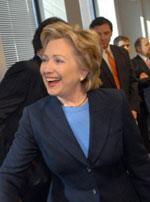 It took nearly two weeks and an uproar over her misstatements about a 1996 trip to Bosnia, but Hillary Clinton finally weighed in on the Obama/Wright controversy yesterday, in a long interview with the Pittsburgh Tribune-Review:

Sen. Hillary Rodham Clinton, in a wide-ranging interview today with Pittsburgh Tribune-Review reporters and editors, said she would have left her church if her pastor made the sort of inflammatory remarks Sen. Barack Obama’s former pastor made.

“He would not have been my pastor,” Clinton said. “You don’t choose your family, but you choose what church you want to attend.”
…. The Clinton campaign had refrained from getting involved in the Wright controversy, but Clinton herself, responding to a question this morning, denounced what she said was “hate speech.”
“You know, I spoke out against Don Imus (who was fired from his radio and television shows after making racially insensitive remarks), saying that hate speech was unacceptable in any setting, and I believe that,” Clinton said. “I just think you have to speak out against that. You certainly have to do that, if not explicitly, then implicitly by getting up and moving.”