Mitt Romney announced a big Michigan Christian Right endorsement today: Marlene Elwell. Not exactly a household name, Elwell was a key advisor to the 1990s-era Christian Coalition and helped engineer Pat Robertson’s strong finish in 1988’s Iowa presidential caucuses.
More recently, Elwell directed the Americans of Faith coalition for John McCain’s presidential campaign. She left the campaign last spring after saying McCain’s top staffers—though not McCain himself—treated her and fellow religious activists like “they had contempt for the faith-based community… The way we were being treated it was as if we had leprosy.”

A conservative Catholic who led a successful 2004 campaign to ban gay unions in Michigan by amending the state’s Constitution, Elwell told God-o-Meter in a phone interview that she has devoted much of the last two months to trying to derail Mike Huckabee’s campaign. Though she says the Huckabee camp repeatedly tried to sign her during 2007, Elwell calls the former Arkansas governor a liberal on non-hot button social issues like education.
Elwell has a strong network of conservative Christian activists in Michigan, but she says she’s limiting her efforts to promote Romney and stop Huckabee to the state’s Catholic community. She spent a month in Iowa before the state’s first in the nation caucuses and concluded that evangelicals couldn’t be dissuaded from supporting Huckabee. “The evangelical community in Iowa was not wanting to listen—Huckabee was one of them and they were going to vote for him,” Elwell says. “So I concentrated my effort on Catholics.”
Entrance polls from the Iowa caucuses did not gauge the candidates’ Catholic support, but New Hampshire entrance polls show that Huckabee got 7-percent Catholic support from Republican voters, compared to 38-percent each for Romney and McCain.
Elwell says she decided to back Romney on Saturday, after receiving mail trumpeting McCain’s pro-life record. She doesn’t consider McCain to be fully pro-life because he supports embryonic stem cell research. The mailing included the insignia of the Pro-Life Federation of Michigan, which Elwell calls a shell group that lacks legitimacy. “McCain’s supposed to be a straight talker,” Elwell says. “And this is not straight talk.”
The Pro-Life Federation of Michigan’s web site does not include a contact number, but God-o-Meter has sent an email to the group and will report back if it learns more. 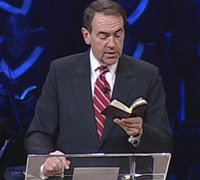