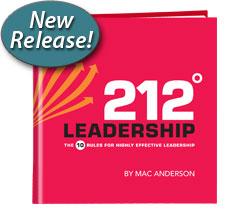 An excerpt from 212° Leadership, by Mac Anderson

Leaders lead by example, whether they intend to or not.

What example did you set today? When you lead by example, you engage your people to follow your vision…not by words, but by action. While you are measuring your employees’ performance, they are measuring how well you follow through on both your words and your deeds.

Think leading by example is only for top management? Think again. Whatever your position in your organization, the way you do your job…and the attitude with which you do it…determines the impact that you have.

I recently read a story by Mark Brown in the Chicago Sun-Times that really drives this point home. Mark wrote about a Chicago-area mailman, Mike Martinez, who passed away at the age of 50, but left a lasting impression by the example he set:

“Mike was a heckuva nice guy who knew everyone on his route by name and always greeted them with a smile, a wave and some friendly chitchat.

“He was the kind of mailman who would warn them if they’d forgotten to move their cars on street-sweeping day, search the post office on his weekend day off for their missing package or stop by their homes after work for a beer or a barbecue.”

The article goes on to describe other people that Mike touched as he delivered the mail, including Tom Lutz, who had suffered a stroke. Mike would call Tom and ask him to help deliver the mail to his neighbors as part of his rehab.

“He would encourage me to try a little harder each day, as my bad leg would get better little by little,” said Tom.

“Martinez was such an unforgettable character, in fact, that some of those customers built a memorial garden in his honor.

“I’ve never seen anything quite like ‘Mike’s Corner,’ certainly not for a mailman. The garden consists of an exquisitely landscaped corner parkway plot with a small stone monument topped by an old-fashioned flag mailbox and a plaque designed to look like a letter. The letter to Mike T. Martinez Jr. carries a return address of ‘Rest in Peace 1959-2010.’

“You don’t need to have a big-shot job to leave your mark in this world. All is takes is a warm smile, an upbeat attitude and a kind heart.”

There’s no doubt about it. Mike left some big shoes to fill along his route…but that challenge to achieve the same connection with those he served is part of his legacy.

“‘It really makes you step up your game,’ said mail carrier Tamme Price as she worked his old route.”

That’s the power of a living example. It can make those around you “step up their game,”…sometimes long after you are gone.

Through your words, actions and deeds, you set the foundation for building an environment of trust and respect.

Trust is the key to both managing people and building a high performance company. It is the foundation on which relationships are built. According to Tom Peters, “Technique and technology are important. But adding trust is the issue of the decade.” Peters suggests that managers must take a “high-tech and high-trust” approach, putting the issue of trust at the top of the agenda and treating it like a “hard issue, not a soft issue.” If employees feel you don’t trust them to do their jobs correctly and well, they’ll be reluctant to do much without your approval. On the other hand, when they feel trusted that you believe they’ll do the right things well, they’ll naturally want to do things to the best of their ability and be deserving of your trust.

In On Becoming a Leader, Warren Bennis outlines the four ingredients for leaders to generate and sustain trust:

1. Constancy. Whatever surprises leaders themselves may face, they don’t create any for the group. Leaders stay the course.

2. Congruity. Leaders walk their talk. In true leaders, there is no gap between the theories they espouse and the life they practice.

3. Reliability. Leaders are there when it counts; they are ready to support their co-workers in the moments that matter.

While corporate scandals, terrorist threats, office politics, and broken relationships have created low trust on almost every front, I contend that the ability to establish, grow, extend, and restore trust is not only vital to our personal and interpersonal well-being, it is the key leadership competency of the new global economy.

I am also convinced in every situation, nothing is as fast as the speed of trust. 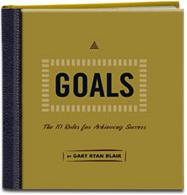