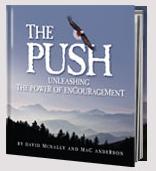 Encouragement can come in many forms. Sometimes it is the courageous, honest words of a friend or loved one that help us make a course correction away from self-defeating and limiting behavior. Such words were spoken to me one cold and windy morning. Perhaps a little background might help.

As a young person I was very ambitious. Impatience, fueled by an intense desire to succeed, led me to forego college and start my first business straight out of high school. I was not suspicious or afraid of “get rich quick” schemes; on the contrary, I wanted to get rich, and the quicker, the better.

By my mid-twenties my drive had propelled me to a level of success that included fancy cars, a beautiful home, international travel, and as my playground. All this was clear evidence that I had joined the ranks of those who had “made it.”

At the age of twenty-eight my business failed. Having merged my whole identity with the business, when it disintegrated, so did I. Besides having nothing, I felt I was nothing. The downhill slide was slow, steady and painful. Convinced that I had blown the most wonderful opportunity life would ever present, I saw no promise in the future whatsoever.

I took refuge in late nights out with friends, which severely threatened my marriage. Ironically, it was my wife who rescued me.

One morning I came to the breakfast table nursing a king-sized hangover-not exactly a time when one is looking for advice! However, my receptiveness was of no concern to my wife, who was determined to confront me with the truth.

Quietly, slowly and succinctly, she uttered words that will be indelibly imprinted on my mind:

“David, you are becoming so ordinary.”

Ordinary! Ordinary! The words seared my fuzzy brain and haunted me for the rest of the day. At my core I had long believed that there was no such thing as an ordinary human being. “What have you been doing?” I asked myself. “Two years ago you were on top of the world and now you have plunged to inconceivable depths.”

Insight and learning comes only when one is open and ready. My wife’s words had left me a vulnerable, yet willing, student. I immediately received what is known as a blinding glimpse of the obvious. So life had been unfair to me. So what? Had it not been unfair to millions of others? Had many of them not faced far worse circumstances? Had they accepted defeat?

My reaction for two years had been to be a victim and to remain a victim. My behavior of blaming, excuse making and finger pointing was getting me nowhere. The guidepost to a positive future flashed like a neon sign: personal responsibility. It was a road that I knew would not be easy, but upon which I was ready to embark without the slightest hesitation.

Since that morning, I have built a successful new business, written several books, produced films, and been a guest speaker at conferences all over the world. There has been no greater learning for me than within the events and circumstances of our lives is the wisdom upon which to build our futures.

My life has taught me that mistakes don’t matter, failure doesn’t matter. What matters is that we continue to move forward and grow from our experiences. Hal Prince, the famous Broadway producer, said: “Anyone who hasn’t had a failure is an amateur.”

My wife, Jo, has passed away. Her words from many years ago, spoken with candor yet great love, are my ongoing encouragement to settle for nothing less than the extraordinary.

If you’d like more lessons on leadership, purchase “The Push – The Power of Encouragement” at the Inspired Faith Gift Store from Beliefnet. 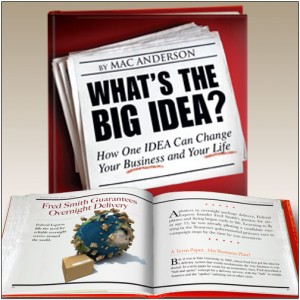