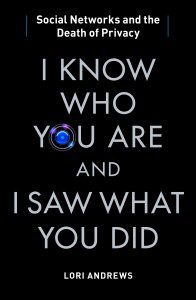 I caught an interesting episode of the Diane Rehm show today featuring Lori Andrews, author of I Know Who You Are and I Saw What You Did,a new book releasing today about social networks and the rapid erosion of privacy. Andrews and fellow guest Marc Rotenberg, the executive director of the Electronic Privacy Information Center (and an obvious foil for Mark Zuckerberg!) very reasonably presented the case for stricter privacy laws.

Andrews in particular argued for an “opt in” approach whereby consumers would need to go out of their way to allow third-party companies to collect and sell their information, with a single sort of clearinghouse agency that would enable consumers to do this one time and with one action. This is radically different than the way it is done now, when companies often don’t need our consent to gather and sell even the most private information about us, and the burden is on us to opt out — which we have to do Whac-A-Mole style, one company at a time.

But what impressed me more than their arguments (which I did not always agree with) was the way both guests handled the loose cannon of the episode: author Jeff Jarvis, who comported himself just about as rudely as I’ve ever heard a professional guest behave on NPR (excepting politicians, of course). He accused the host of setting up a straw man about this all being about the extreme notion of our credit card numbers being posted online. He then proceeded to set up a straw man of his own, suggesting that the other guests were Luddites who could not appreciate the value of the public sharing that the Internet provides — a social good that, of course, no one was disputing.

Jarvis not only missed the point of the discussion, but he repeatedly interrupted the host and the other guests, refusing to listen to anyone else’s perspective. You could almost hear him rolling his eyes like a teenager. On Twitter in real time he posted, “Diane Rehm using the most hackneyed & ridiculous privacy argument: I don’t make my credit card # public. A non sequitur.”

I can only imagine how humiliated his publishing house must feel, especially his publicist, who successfully booked him on one of the nation’s most thoughtful forums for discussion and then must have cringed as Jarvis bit the hands that fed him, then bit again.

I was surprised by all this, having heard Jarvis speak once before about a book I enjoyed and learned from, What Would Google Do? It was hard to reconcile this arrogant attack dog with the forward-thinking innovator who wrote that book.