The Mormon Skeleton in My Family’s Closet

Every family has one, right? The skeleton in the closet. The story that doesn’t get told. I just didn’t realize that my own family’s story would involve a touch of shame about my religion.

I’m an adult convert to Mormonism, so I don’t have any Mormon ancestors to speak of. I do have one precious mention of Mormonism on my mother’s side, when one of her female Hamer ancestors met some Mormon women who were also heading west. Margaret Hamer Hecox was one of the early settlers of Santa Cruz, California, and recorded this about her experiences traveling in 1846-47:

It was while making our way to St. Joseph that we met hundreds of Mormons, who had recently been driven out of Nauvoo. I got acquainted with a Mormon woman, and asked her many questions. I found her just like other women. She had two children: one of them was sick, and we talked over things just as if she had been one of my own people.

She told me that Brigham Young was a great and good man, even more than a man, because he had his instructions directly from God,-that he was going to found a Kingdom for the Saints where all would be good and happy. I liked her very much, and from what she told me I was not so afraid of having trouble with the Mormons as the men were. They thought we might have to fight our way through, but we had no trouble whatever. In fact, when we arrived at the place where they were supposed to be camped in great numbers, we found they were all gone. We heard that an angel had appeared to Brigham Young and told him to leave Missouri. After that they intended to go to California, but, finding so many going there, concluded to settle in Salt Lake.

I’ve always liked this story because it shows I have an ancestor who was committed to seeing past labels to the heart of a person. She found this Mormon woman to be “just like other women” and found points of common ground that superseded theological differences.

Until recently, this was the only family story I had of any brushes with early Mormonism, even though by the mid-nineteenth century all of my family on both sides were Midwesterners. So imagine my surprise last month when I discovered (thank you, Ancestry.com!) that my great-great grandmother Sarah A.G. Turk Riess (1839-1924) had actually been married to a Mormon before she married my great-great grandfather George Ludwig Riess. She was just fifteen when they married in southern Illinois. Here is the perspective of her young husband, Isaiah Moses Coombs (1834-1886), about this brief union:

When Isaiah was about ten years of age he met, for the first time, his future wife, Sarah A. Turk, whom he described “as an angel, fair and lovely.” She was the daughter of a widow, Eliza B. Turk. On November 30, 1854, he was married to Sarah. One year later he made plans to emigrate to Utah but Sarah refused to accompany him, having never accepted the principles of Mormonism …. On September 12, 1856, he left for a mission with Apostle Parley P. Pratt and labored in Illinois and Arkansas. He visited his wife, Sarah, and made every effort to induce her to accompany him to Zion but, again, she refused. During their separation she had given birth to a child which lived only a short time.

There’s absolutely no record of any of this in our Riess family history; my branch of Riesses were stern German Protestants who founded churches all across southern Illinois and southern Missouri and also helped found Eden Theological Seminary, where Reinhold Niebuhr and Walter Brueggemann both studied. The seminary is still up and running today.

Needless to say, I was gobsmacked. All we Riesses knew about Sarah was that she married George in 1861 and had seven lovely German-American Protestant kids.

So, that’s our Mormon skeleton. It’s certainly possible that this story has been expunged because of the shame of having a divorce in the family (or even worse, no divorce at all before Sarah’s remarriage; I found no record of an official dissolution). But it’s also possible that the shame of this Mormon connection was simply too much for my Riess forebears–especially since the 1850s was a decade of extreme anti-Mormon sentiment. (To wit, the 1856 election in which Mormonism and slavery were identified as the “twin relics of barbarism” that would bring the United States to its knees.)

I can just see my ancestors, rolling over in their graves as they look at me now. 🙂 I’ve always been so proud of them . . . but I’m no longer confident that they would reciprocate that feeling! 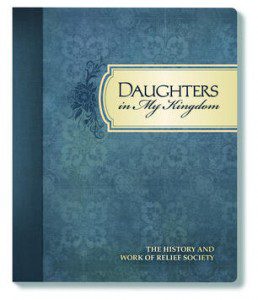