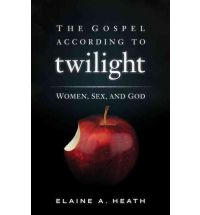 With the Breaking Dawn movie coming out in a couple of weeks, hundreds of thousands of Twi-hards will be revisiting Part 1 of the conclusion to Stephenie Meyer’s saga of romance and the undead boy next door. Most of them will be focusing on The Wedding and The Honeymoon — how will the film version depict Bella’s violent “something-black-and-blue” wedding night?

I’ve blogged before about some of the disturbing aspects of Meyer’s novels — books that I should say up front I read and enjoyed. But just because I had a great time reading the books doesn’t mean they’re not troubling. Reading can be complicated like that.

I hope that readers and viewers will check out Elaine Heath’s The Gospel According to Twilight: Women, Sex, and God for some hard-hitting critique of the novels’ more disturbing messages about women and the violence that’s perpetrated against them throughout the series. One thing she put her finger on that I hadn’t noticed is the fourth novel’s tacit acceptance of what amounts to pedophilia in Jacob Black’s character:

Due to a genetic predisposition to produce new generations of sturdy werewolves, an irresistible attraction called “imprinting” causes male Quileutes with the werewolf chromosome to bond for life with mysteriously selected females. One day a Quileute boy feels nothing for a particular girl; the next day imprinting kicks in and voilà, he adores her for the rest of his life. She might be lovely, homely, boring, shrill, kind, or indifferent. It matters not. She has become the love of his life. He will die before he lets anything harm her. In the books, she always agrees to the imprinted pairing. Always. Even though the imprint happens to him, not her, his adoration eventually becomes irresistible.

Jacob describes the sensation of imprinting as a growing heat. It is as if dawn is breaking forth within his soul. Everything within the boy is undone in wonder and adoration as he discovers that his mate is now the center of his existence. The word “love” is too weak to describe what he feels. All the other loves he has experienced in life, all other goodness and joy, are now filtered through the one central love, his mate. She has become his anchor, his sun, his reason for being. She is now the defining point, the interpretive key to all existence. In short, he worships her (Breaking Dawn, 359–60).

This is the kind of adoration and unconditional love that young women long to receive.  Who wouldn’t want to be cherished in this way? But there is a dark side to the brilliance of being worshiped. As anyone who has survived stalking will tell you, it is frightening to be the object of another’s obsession. The one who is loved loses her freedom as she is watched, followed, and controlled. The underbelly of this kind of love is violence.

As we’ve seen, the female recipient of the male imprint has virtually no freedom of choice in her relationships. That freedom is taken away by the male. He waits on her hand and foot and makes her the center of his universe. If he imprints on her when she is a baby, she grows up indoctrinated to the expectation that she will marry him. She is socialized to accept his adoration whether she initially wants it or not or whether she is old enough to understand what is happening, as in the case of Quil (a teenager) and Claire (age two) (Eclipse, 176). The female does not experience the sudden imprint emotionally or spiritually in the way the male does. She is the passive recipient of the male’s imprint on her. The power of the male over the female is inherent in the process of imprinting. 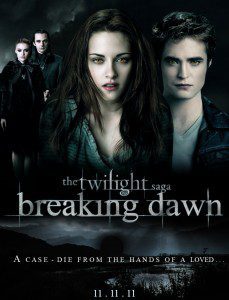 What’s more, the Quileute male actually grooms his intended–whether in the case of Quil and Claire or Jacob and Renesmee–and believes that she reciprocates his love. As Heath points out, this is exactly what pedophiles do. And to have it romanticized and glamorized ought to disgust us.

This month on WJK Radio, Heath talks about this issue as well as many of the positive aspects of the Twilight novels, which offer strong Christian themes of resurrection, reconciliation, and redemption alongside the more unpalatable aspects of gender stereotyping. Check out the 25-minute interview here.

(And yes, I’ll still be seeing the movie despite all these problems. It’s my very own brand of heroin.)

The Moral of "Colonial House": Academics Like Me Are Entirely Useless
archives most recent
More from Beliefnet and our partners
previous posts