Sesame Streetwalkers: Peggy Orenstein on the Sexualization of the American Tween Girl 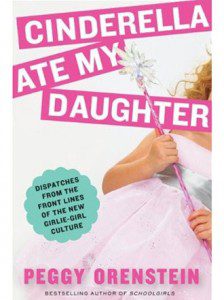 My daughter is not a pink-princess kind of girl, but we’ve had enough glimpses of fairy wings and pixie dust to make me interested in reading Cinderella Ate My Daughter, Peggy Orenstein’s incisive and funny exploration of the “new girlie-girl culture” she sees being marketed to girls at ever-younger ages. If you have a young daughter, this is a helpful and entertaining book to read.

The last decade has been confusing for girls and their parents, says Orenstein:

…images of girls’ success abounded—they were flooding the playing field, excelling in school, outnumbering boys in college. At the same time, the push to make their appearance the epicenter of their identities did not seem to have abated one whit. If anything, it had intensified, extending younger …. Did playing Cinderella shield them from early sexualization, or prime them for it? (pp. 5-6)

Good question. In the book, Orenstein investigates many aspects of a trend toward premature trollophood, from the overtly horrifying (Toddlers & Tiaras) to the more mundane and accepted. I liked the chapter on beauty pageants very much, actually, because where other writers have taken cheap and obvious shots at parents who subject their daughters to these ghastly freak shows, Orenstein forces us—their would-be critics—to take a hard look at where we have inaugurated our daughters into a princess culture that differs only in degree rather than in kind.

This means us when we encourage our kids to idolize “whoresome” Disney starlets like Hannah Montana; when we give eight-year-olds $50 spa birthday makeovers at narcissism venues like Club Libby Lu; when our daughters see us buying into our culture’s terror of female fat; or when we compliment them on appearance more than intelligence or what they have accomplished.

At one time or another I’ve probably been guilty of three out of four of those peccadilloes. (I’m grateful that the Libby Lu chain closed before my kid even knew that such a place existed.) Like the author, I’ve debated the Barbie question, the skimpy bikini question, the pink bedroom question, the Disney vacation question, and the social media question. (In case you’re interested, the answers I’ve come to are no, no way, whatEVER, not yet, and not yet. I reserve the right to change my mind.)

If you’re at all interested in feminism and popular culture, this is an important read. I don’t agree with every argument Orenstein makes (including her tenuous cause-and-effect case for the rise of Disney princesses as an antidote to the national mood after 9/11), but the book gave me a good deal to think about as a parent. In the end, we want to “let our daughters enjoy pop culture without becoming pop tarts” (p. 114), and Orenstein raises the kinds of questions that pave the way.