Where Is God in Chronic Illness? 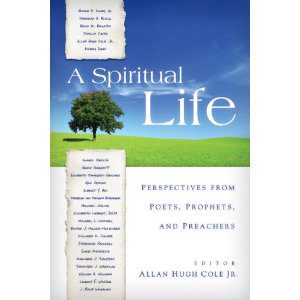 As we continue with our Thursday Spirituality series for May, we draw from what I thought was one of the most powerful essays in Allan Cole’s anthology A Spiritual Life. I had not heard of Elizabeth Damewood Gaucher before, but her compelling account of being diagnosed with MS at the tender age of 30 had me spellbound.

Where is God when you’re sitting across from the doctor and he tells you that your health and life will get progressively worse with little hope of a cure? How does that knowledge then change the way you live the time you have left?

One morning in the shower I noticed I could feel the razor blades on my skin on one leg, but only pressure on the other. “That’s odd,” I thought. “Maybe I really did something terrible to my back trying to dig that hole in the yard last week.” I chalked it up to a pinched nerve, and assumed I needed an X-ray.

But the morning I woke up with retching heaves of vomit brought on simply by tilting my head one degree the wrong way eliminated all doubt that this was exclusively a psychological issue or simply a pinched nerve. This was very physical. It was also very dangerous. I knew I was in trouble. I took a deep breath and dragged myself off the bed, onto the floor, and across the hall to the bathroom, throwing up the whole time. If I can just get to the tile floor, I thought, it will all be okay.

My husband found me lying on the floor with my face pressed against the toilet’s cool porcelain. As any sane and caring person would do, he urged me to let him help me up; but I cried and begged him to let me stay on the floor. I had found comfort. The world was no longer hurling me in deep loops from east to west by my brain stem, and I literally saw no past and no future, only that moment. God help the person who tried to take me out of that moment!

My husband did the only thing he could think of, and it turned out to be the right thing. He called my mother states away and asked for her help. As I recall, the telephone was held up to my ear as I lay on the floor, and Mom calmly but insistently told me that I had to get up, that I had to get in the car, and that I was going to the doctor. There is something about your mother’s voice that cuts through everything sometimes. Hearing her speak, I knew I had to get up.

I think I threw up a few more times en route to the doctor’s office. I remember trying to lie motionless in the moving car, which was not successful. I remember being lifted into a wheel chair when the door to the building was only steps away. After that, I don’t remember much, only some medication to get the vomit under control and a follow up appointment scheduled.

At the follow-up appointment, I felt much better. No more throwing up, no more world spinning maniacally, no more patches of sensation loss. I felt better than I had in a long time. “What a relief,” I told my doctor. “That sure was crazy, wasn’t it? So glad that’s over.” When one is invested in a certain outcome, the mind truly can work miracles of denial.

I assume that these are the moments they try to prepare students for in medical school. A doctor has to tell the perky blonde girl standing on the verge of everything she ever dreamed of that he is referring her for an MRI over at Duke University, just to rule out MS. God bless Dr. Crummett. I know now he had to be sure what was going on, and that he didn’t want to scare me.

I had the MRI, and I was diagnosed with relapsing-remitting multiple sclerosis when I was 30 years old. This had to be a mistake. This was not part of my personal brand.

Anyone who has been diagnosed with a serious disease or suffered a painful loss understands the extended period of processing the event. Denial, anger, bargaining, and depression tend to hallmark the early stages of grief, though these phases do not occur sequentially or even necessarily in proximity to one another.[1] The phases do all have a singular focus, however, in the human attempt to reach ultimate acceptance of a new reality. Without such acceptance, life can never move forward.

I initially experienced the phases of grief as my body and mind warred over which would control my destiny in the new light of multiple sclerosis. It was as if psychological and physical effort were the front line of the old guard trying to defend my perceived personal brand of “hard-working, goal-oriented, results-getting gal.” I could feel myself stubbornly headed down a dead-end road. It was only through eventual and complete submission of both body and mind and a corresponding openness to spiritual influence that I began to reform my understanding of what defines my life.

Multiple sclerosis is a progressive disease with no known cause and no known cure. The body is misfiring, identifying the fatty insulation of nerve fibers called myelin as a foreign and enemy presence. When there is an invasive presence, what the body does is a wonderful thing. The immune system establishes laser focus on the enemy and rallies all of its resources to rid the body of the intruder. The trouble with MS is that the body turns against itself; and no one wants to lose her nerve fiber protection, ever, under any circumstances. If you’ve seen an appliance or computer with wiring shorts, you have a picture of the path a human being is headed down when the myelin starts to go. The machine still starts up. It can still do pretty much what you want it to do. But it begins to get a little scary when it “shorts out” with more frequency and pop. You start to wonder if the machine should even be on. When you begin to feel like a ghost in the machine, it’s more than a little scary. It is terrifying.

May 21: It's the End of the World As We Know It. Again.
archives most recent
More from Beliefnet and our partners
previous posts