Satan Sues Rob Bell for Defamation; Seeks $18B in Damages Over “Love Wins” 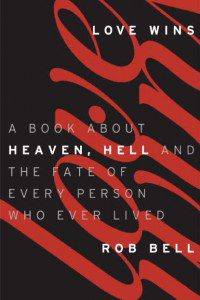 Satan announced today that Hell has filed for civil damages against HarperOne author Rob Bell, whose new book Love Wins hit shelves in March and has raised, well, hell. In the book, Bell asserts a universalist theology, claiming that God will save every sinner.

“That’s gonna drive us right outta business,” explained the plaintiff’s chief counsel, saying that Mr. Satan is seeking $6 billion in loss of future income, $6 billion in pain and suffering, and $6 billion in punitive damages to deter other would-be universalists.

Many in the legal world were not surprised at Mr. Satan’s attempts for legal redress, only that it took him so long to assemble his team of counselors. It has been a full two weeks since the March 15 publication of Love Wins.

“Where I live, selecting a legal team is a hard decision,” Mr. Satan explained in a rare interview. “There are an awful lot of lawyers to choose from down in hell.”

The defendant’s attorneys do not deny that Mr. Bell’s book has deprived Mr. Satan of some potential revenue streams. However, they argue that this has already been more than remunerated in the hundreds of thousands of people who are now more vulnerable to Mr. Satan’s sales pitches because of their own increased judgmentalism and unchristian behavior toward Mr. Bell.

The defendant Mr. Bell, who was rescuing an abandoned puppy at press time, could not be reached for comment, but his opponent expressed astonished displeasure at Bell’s chutzpah in publishing Love Wins.

“I mean, I’ll be damned!” Mr. Satan declared, then checked himself. “Actually, I apparently won’t. That’s precisely the problem.”