As many of you know, I am a daily Twitter person, tweeting out a chapter of the Bible every day with humorous — okay, sometimes snarky — commentary. For the last year and a half I’ve been deeply interested in Twitter’s power to communicate, if we can only cut past all the noise of people telling the world what they had for breakfast. (I had Honey Nut Cheerios . . . and you?) And now, with recent uprisings in Egypt and elsewhere, Twitter’s power has transcended adolescent exhibitionism to become a vehicle for real social change.

But Twitter is an awful lot to keep up with. Author Leeana Tankersley admits that she only very recently jumped into the Twittersphere, but deciding to do so has been a game-changer for her. Keep reading to find out why. –JKR

I began tweeting very recently. Some might even say, I-should-be-embarrassed recently. After months and months of tweeter-tottering, I jumped into the madness.

At first, I thought my Twitter-woe was just good, healthy boundaries. But through a series of events, I began to see that my growing aversion to Twitter was about something much deeper.

First, I went to a writing conference and found myself getting angry at Twitter. And especially getting angry at all those writers who have the luxury of time to spend 6 hours a day on it. How dare they. And how dare Twitter. (Anger, as we all know, is a secondary emotion, so this was my first clue something was up.) 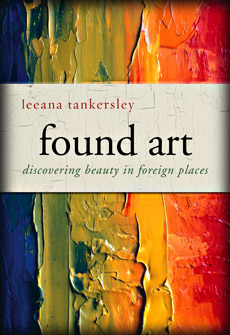 Second, I had a conversation with a woman I really respect and she (without really realizing it) caused me to see that I spend a lot of time regretting how little time I have. Get the irony there? Perhaps that emotional energy could be better spent actually using the time I do have to move forward and get something done. (Hmmm, indecision and paralysis have nothing to do with Twitter, either.)

Third, I had another conversation with another woman I really respect, and she assured me that the whole Twitter business wasn’t an all-or-nothing proposition. So you’re saying I could be on Twitter without becoming one of those full-fledged Twitter Whores? In other words, the 6-hours-or-nothing construct might not be a helpful or accurate way of thinking about things. (Well, well, well . . . if it isn’t my good friend polar extremes that keeps me from having to live in the difficult fray of taking each day as it comes.)

Later that night, I started thinking about my real problems with Twitter. And I realized, my real problem is with me. At the heart, I saw Twitter as another thing I was failing at before I even started. Twitter, like so many things in life, was reserved for those people – the better people – who are culturally savvy, tech savvy, clever, and pretty.

And all of a sudden, I realized I had given all this power to Twitter, and the only way to take it back was to actually face the deeper conversation that was going on inside my head. The toxic one. The shame-based one.

“Hiding shame even from ourselves will keep us from becoming healthy. We will continue to reject ourselves and others until we deal with our humanness. We must be willing to accept ourselves each day, and not be discouraged if we fall short of our ideals” (taken from Emotions Anonymous materials).

I was hiding my shame behind the thin Twitter-veil. I started to wonder: Could it be possible that God was using Twitter as an instrument of conversion in my life, an opportunity for transformation not condemnation?

Dealing with toxic shame requires that we accept the fact that we are no more than human and no less than human. We are not super-human. And, we are not sub-human.

So, some days, as just a human (no more and no less), I will be amazingly Twitter-ific. And other days, I will need to focus on other things. All of this is OK. Because, after all, I’m just a human.

So I started Tweeting. And, I feel good. Triumphant over the darkness.

I wanted to blame Twitter for being a soul-killer before I ever even picked out my handle. That’s my own issue. Not Twitter’s. I’m coming to terms with that.

Ever done this? Ever given something way more power over you than it deserves?

Were America's First Presidents Christian?
archives most recent
More from Beliefnet and our partners
previous posts