In the wake of the Tucson shootings, Grant Hardy asks whether Mormons are doing everything they can to tone down the rhetoric of hatred and violence. It’s a particularly important question as we celebrate Martin Luther King Day today. And why not begin with hymns? –JKR 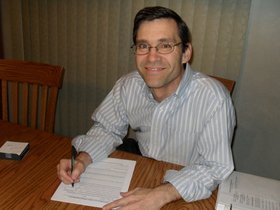 It is perhaps noteworthy when the Mormon Church and a Democratic President of the United States are saying the same thing.

In 2009, still dealing with the contentious aftermath of Proposition 8, LDS leaders issued a statement entitled “The Mormon Ethic of Civility,” which noted that “the Church views with concern the politics of fear and rhetorical extremism that render civil discussion impossible. . . .
Latter-day Saint ethical life requires members to treat their neighbors with respect, regardless of the situation. Behavior in a religious setting should be consistent with behavior in a secular setting. The Church hopes that our democratic system will facilitate kinder and more reasoned exchanges among fellow Americans than we are now seeing.”

Last week, after the tragic shootings in Tucson, President Obama observed that “at a time when our discourse has become so sharply polarized–at a time when we are far too eager to lay the blame for all that ails the world at the feet of those who think differently than we do–it’s important for us to pause for a moment and make sure that we are talking with each other in a way that heals, not a way that wounds . . . only a more civil and honest public discourse can help us face up to our challenges as a nation.”

Both statements call for respect and restraint in the ways we speak to, and about, those with whom we disagree, and they urge self-reflection about our own participation in uncivil discourse. As a very modest first step, let me suggest that we, as Latter-day Saints, take a closer look at our “behavior in a religious setting.”

For me, it is getting more and more uncomfortable to sing militaristic hymns in sacrament meetings. There is no question that the military plays an honorable and necessary role in our society, but images of violence seem out of place in a sacred setting in which we reaffirm our covenants as followers of Christ, especially if those images are enthusiastically voiced within stirring melodies.

In my ward, the day after the assassination attempt on Representative Giffords, we sang these lines:

“We a war’gainst sin are waging; We’re contending for the right. Ev’ry day the battle’s ragin; Help us Lord, to win the fight” – Hymn #258

There is no way that our ward music director, who is the nicest man, made a connection between events of the previous day and hymns that seem to justify violence in defense of faith, but one might still question the appropriateness of those songs on that particular Sunday, or on any Sunday, for that matter.

There are other hymns in a similar register:

“In the fight for right let us wield a sword, the mighty sword of truth” – Hymn #243

“Up awake ye defenders of Zion! The foe’s at the door of your homes . . . Assisted by legions infernal, the plundering foeman advance” – #248

“Behold! A royal army, with banner, sword, and shield, is marching forth to conquer, on life’s great battlefield” – #251

“See the foe in countless numbers, marshaled in the ranks of sin, Hope of Israel on to battle, now the vict’ry we must win. Strike for Zion, down with error; flash the sword above the foe! Ev’ry stroke disarms a foeman, ev’ry step we conq’ring go” – #259

The last example, by the way, refers to an incident in Exodus in which the question posed was a prelude to a religious massacre:

Then Moses stood in the gate of the camp, and said, Who is on the Lord’s side? Let him come unto me. And all the sons of Levi gathered themselves together unto him. And he said unto them, Thus saith the Lord God of Israel, Put every man his sword by his side, and go in and out from gate to gate throughout the camp, and slay every man his brother, and every man his companion, and every man his neighbour. And the children of Levi did according to the word of Moses: and there fell of the people that day about three thousand men. (Ex. 32:26-28)

Can anyone read this today unreflectively, in light of suicide bombings, ethnic cleansings, and church shootings? Perhaps Moses’ order to kill family, friends, and neighbors was the right thing at the time, but surely this is not a general principle of the Gospel, any more so than God’s command to Abraham to sacrifice his son Isaac (another story that should make us cringe if we take it seriously). In any case, is this what we really want to keep in mind during sacrament meetings? There are a lot of other great hymns that we could be singing instead.

With militaristic rhetoric, a legitimate struggle with temptation and sin can escalate into a life-and-death fight against those we regard as wicked–as has happened with the idea of jihad among radicalized Muslims. Such sentiments also encourage a besieged mentality that claims victimhood at the slightest provocation and cause us to see people of differing opinions and lifestyles as inherently evil (these are not the most appealing aspects of contemporary Mormon culture).

I’m not denying that true evil exists in the world, or that it needs to be strenuously opposed, but these hymns, like inflammatory political rhetoric, don’t make crucial distinctions. Those who claim that President Obama is a socialist, or even a tyrant bent on taking away our freedoms and shredding the Constitution, are losing their grip on reality. Those who see the Tea Party as an embodiment of racism, or supporters of Proposition 8 as primarily motivated by hatred, are similarly off the mark. We’re talking about politics and policies here, not the end of civilization as we know it.

It’s true that hymns use language metaphorically, and few people would take images of religious armies, invasions, conquests, and swords dismembering enemies literally (at least not in twenty-first-century America), yet what we sing in church does influence how we think of ourselves in relation to the wider world. And perceptions do matter. Two decades ago the Church changed the temple ceremony to delete metaphorical elements that could be easily misunderstood. In 1927 the hymn “Praise to the Man” (about Joseph Smith) was modified to similar effect. In the lines “Long shall his blood, which was slain by assassins, / Stain Illinois, while earth lauds his fame,” the words in italics were changed to “Plead unto heav’n.” The original lyrics were judged a little too pointed, a little too threatening. It was time to move on.

Our militaristic hymns are relics of an earlier era, when religious violence was much closer to hand (with Mormons on both the receiving and giving ends). Coming to terms with the past, which was often brutal and offensive to modern sensibilities, is an important work; and when issues of slaughter, slavery, and discrimination appear in the scriptures, by all means let’s deal with them in thoughtful, informed ways, even in Sunday School. But there is no reason we need to celebrate and adopt militaristic attitudes ourselves in sacrament meetings.

Grant Hardy is a member of the stake presidency in the Asheville, North Carolina stake and a history professor at UNC-Asheville. He is the author of Understanding the Book of Mormon: A Reader’s Guide and several other books.

Does God Respond When We Suffer?
archives most recent
More from Beliefnet and our partners
previous posts