Why Are Mormons the Third-Most-Hated Religious Group in America? 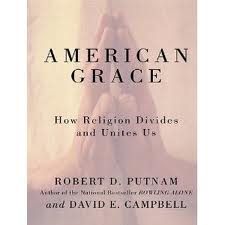 Everyone is talking about the sociology of religion doorstopper American Grace by David Campbell and Bowling Alone author Robert D. Putnam. I read it this summer and am re-reading parts of it now. It’s a great book that will be fodder for several future blog posts about various demographic trends in American religion. The question I want to consider today is how much Mormons are still hated, despite the strong assimilationist trends of the last sixty years.

Islam tops the list as the most-disliked religion in America, which is not surprising; Buddhism comes in second, which is. The researchers felt that Buddhists scored so low because few Americans actually know a Buddhist (or realize that they already know a Buddhist). However, the researchers then note that Jews, who are also a distinct minority, came out on top in terms of how other religious groups regard them, so small size does not totally explain unpopularity.

The bottom line for Mormons, the authors say? “Mormons like everyone else, while almost everyone else dislikes Mormons.” The only fellow religious group to give Mormons a “net positive” rating was the Jews. (This is interesting, considering the anger many Jews have expressed about Holocaust baptisms, a detail the authors don’t discuss. And incidentally, check out this great new Mormon-Jewish blog at J Weekly.)

Evangelicals don’t like us. In 2008, when Mitt Romney was running for president, “the same percentage of Americans told pollsters they would not vote for a Mormon presidential candidate as had said the same about a Catholic candidate in 1960.” Even worse news for Romney: those numbers had not improved since his dad ran for president forty years before. Among evangelicals, more than half said they would have a problem with a Mormon being president, and only 46% reported having a positive image of Mormons.

Secular Americans don’t like us. Unaffiliated Americans–the rapidly growing population that claims no religion–dislike Mormons even more than evangelicals. Only 45% of those surveyed reported having a warm feeling toward the Latter-day Saints.

We really, really like ourselves. Mormons ranked highest in “in-group attachment,” a finding the researchers felt was surprising, especially since three of the other groups that made the top five–Jews, Catholics, and Black Protestants–have their bonds cemented by a shared ethnicity. About 85% of Mormons say they feel a great warmth toward their own tribe.

The key to future acceptance and understanding, the authors suggest, lies in what they call “bridging”: assimilation into the broader culture. It’s easier to hate and demonize a “they” that lives primarily in Utah, goes to Mormon-dominant universities, and stays within its own religious enclave of friends and family. What breaks down religious barriers is personal contact at work, school, and neighborhood gatherings. This is why the LDS Church’s new “And I’m a Mormon” PR campaign is a fine idea, insofar as it goes.

But according to sociologist Armand Mauss, Mormons have already been on a basic trajectory of assimilation for more than sixty years, so the answer clearly isn’t merely building personal bridges. Despite such bridges, Mormons remain universally disliked. It’s partly about theology; evangelicals are still upset about some Mormon teachings. But it’s also likely about conservative politics and same-sex marriage, two issues where the religiously unaffiliated come down on the opposite side of most Latter-day Saints.

I’ve blogged before about why I wish the LDS Church would reconsider its stance on homosexuality, so I won’t belabor that point here. And if the Church does ever reconsider, I hope it will do so because of the justice demands of Christian theology, and not the popularity whims of a sociological survey.

But here’s something that all Mormons can do, and it doesn’t involve politics: it would help if we stopped regarding ourselves as the finest people on the planet. We ought to take a long, hard look at the fact that we voted our own group tops in this research. It’s one thing to be proud of our religious group and its teachings, but it’s another thing entirely to communicate, as many Mormons seem to, that we feel we have a monopoly on religious truth and strong families. A dose of humility is in order here.

The Engineers' Bible: This Week in the Twible, Nehemiah 1-6
archives most recent
More from Beliefnet and our partners
previous posts