When Is It Permissible to Disagree with an LDS Church Leader?

Last week’s “Mormon Mondays” column on Boyd Packer’s conference talk has generated a fair amount of controversy, to put it mildly. I read some of the comments on the first day and all of the messages and emails that people sent to me privately over the last week–some to disagree with what I wrote, others to thank me for it, and–most importantly–still others to share stories with me of LGBT friends or relatives who have been deeply wounded by the Church’s stance on homosexuality or Proposition 8.

I understand that there are very good reasons, both in scripture and LDS tradition, for many Mormons’ belief that homosexuality is wrong. I don’t want to hash that out again here, or restate why I feel that years from now, the Church will have changed its position and embraced its gay members as full equals and children of God. I want to raise the larger issue that permeates any discussion of doctrine, change, and the prophetic mantle within the Mormon faith: When is it permissible to disagree with an LDS Church leader?

I have observed that the extremists on both sides adopt an all-or-nothing posture on prophetic authority: either every statement that proceeds from a church leader’s mouth is gospel, or it is bile.

Those Mormons on the far right express certainty that anything said in General Conference is an eternal truth, even if this means ignoring historical evidence that prior church leaders were flat out wrong about some things preached about in Conference: that God denounced interracial marriage, for example, or that African-Americans would never be worthy to hold the priesthood by divine decree. Brigham Young taught that polygamy was an essential practice to prepare a person for life in the Celestial Kingdom. He also believed that there was a Loch Ness-style monster living in the Bear Lake, which traveled via an underground tunnel to its other home in the Great Salt Lake.

Clearly, none of these is current LDS teaching.

Those on the extreme left, and many of those who have left the Church, witness such overwhelming evidence of historical change in the Mormon tradition and conclude that little or nothing in the religion can be inspired. If Mormon leaders have made such terrible and obvious mistakes in the past, how can anyone trust their statements in the present? Since Brigham Young and other prophets were so clearly limited by the times in which they lived, who is to say that current prophets and apostles are not equally blinded by the biases of our own day?

The problem with the all-or-nothing view of prophetic authority is that it removes our greatest gift, agency. In the Mormon cosmogony, our God cared so deeply about human freedom that a full third of the host of heaven was sacrificed in order to preserve it. How tragic that those on the far right are so anxious to surrender their agency and allow someone else to do their thinking for them. It is equally tragic, however, when those on the far left conclude that there is no such thing as prophetic or inspired leadership, or that God has long since stopped speaking through human mouths.

The vast majority of Mormons, I believe, are somewhere in the middle of these two extremes. And the middle is the ideal, if least comfortable, place for us to be.

Over the past year I have been tweeting a chapter of the Bible every day with humorous commentary, a project that began on a lark but has taken on unexpected spiritual significance for me (the topic of tomorrow’s blog post). The Twible has made me see the beauty and flawed humanity of God’s prophets, those men and women in scripture who were chosen to bear God’s message to a hurting world. It has been interesting to have my pious caricatures of prophets and apostles fractured apart as I witness their distressing and all-too-familiar struggles.

Fully human but also partly divine, timeless yet creatures of their times: There is nothing simple about prophets in the Bible.

So as for the titular question–when is it permissible to disagree with an LDS church leader?–I’m not going to give you an answer. You are holy children, called of God. You are strong. You have the Wesleyan quadrilateral at your disposal–scripture, tradition, reason, and experience. You can figure it out. 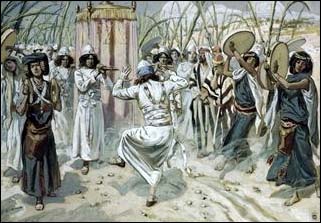 David's Not-Quite-Naked Ark Pole-Dancing: This Week in the Twible, 1 Chronicles 15 to 21
archives most recent
More from Beliefnet and our partners
previous posts