I had a lovely blog post written for today, which I drafted on Saturday after being deeply moved by the beautiful talks from Elder Jeffrey Holland and Elder Dieter Uchtdorf. The blog today was going to be about favorite General Conference talks, and I was looking forward to hearing about your all-time favorite talks–the ones that have stirred your soul or moved you to greater spiritual depth.

That post is now back in “draft” status and can keep for another time. I need to talk instead about what Elder Boyd K. Packer said yesterday in the Sunday morning session, which broke the hearts of many faithful people, both gay and straight.

Packer said, “If we’re not alert, there are those today who not
only tolerate but advocate voting to change laws that will legalize
immorality, as if a vote would somehow alter the designs of God’s
laws and nature … what good would a vote against the law of
gravity do?”

“Some suppose that they were preset and cannot overcome what
they feel are inborn tendencies toward the impure and the
unnatural,” he said. “Not so. Why would our Heavenly Father do that
to anyone?”

Why, indeed? Elder Packer finds it against God’s
natural laws that some people might be born gay, since homosexual
relationships do not lead to children. The Salt Lake Tribune reported:

The senior apostle drew on the church’s 1995 declaration, “The Family: A
Proclamation to the World,” to support his view that the power to
create offspring “is not an incidental part of the plan of happiness. It
is the key — the very key.”

If we
were to take this argument to its logical conclusion, we would then be
compelled to ask why God would create some loving and good people to be
infertile, like several faithful couples in my ward who have been denied
children. (We would also need to ask why the Church has stopped advising members to always eschew birth control, preferring to leave that issue between a couple and the Lord.) Or we might ask why other people are born with autism, or
schizophrenia, or any disability that might preclude a healthy marital
relationship and the possibility of parenthood. But I don’t need to take
this argument to that logical conclusion, because I know in my heart
that the line of argument is fundamentally flawed. Gay people are not
lesser children of God, or morally compromised, or disabled, for being
attracted to people of the same sex.

It is painful to be so at
odds with my Church on this issue.  It is especially painful to see the
Church’s anti-homosexuality arguments take such a step backward; it is
one thing to say, as other apostles have done, that the Church opposes
homosexuality and that “we don’t know” why some individuals appear to be
biologically predisposed toward same-sex attraction. It is another
thing entirely to deny that God would ever create an individual who
would be unable to fulfill a mandate of reproduction, or to equate
homosexuality with pornography, which is a sin of lust, exploitation,
and disordered desires.

I believe that Elder Packer is wrong
that there is no such thing as a godly homosexual relationship. I define a godly partnership as two
individuals who strive in mutual fidelity to honor one another and care together for others. I have seen a number of godly, lifelong,
homosexual relationships, just as I have seen some heterosexual temple
marriages that were unholy, like an LDS man who would not stop
belittling and humiliating his wife in public, or an LDS woman who
turned her children against their father because he had not been as
successful in his career as she thought he should be. On the flip side, I
have seen plenty of excellent, beautiful Mormon temple marriages, and
some unhealthy gay relationships. Like heterosexual marriages, gay
relationships are found all across the spectrum, and it only serves to
demonize gay individuals  to characterize all gay relationships as
“impure” or “not in harmony with the principles of the Gospel.”

The
principles of the Gospel involve love and faith, not condemnation of
anyone who is different. In the LDS Church, we are “trying to be like
Jesus,” as the Primary song puts it. Our goal in life is to become more
like Christ. Why, then, do we fixate so much of our attention on
condemning homosexuality, a subject that Christ did not address a single
time in his earthly ministry? 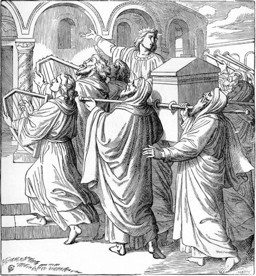 Don't Touch That Ark! This Week in the Twible, 1 Chronicles 8-14
archives most recent
More from Beliefnet and our partners
previous posts