The Fly-Over Bible: This Week in the Twible, 1 Chronicles 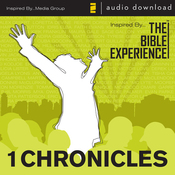 OK, I admit it. I’ve never actually read the Books of Chronicles before. I went to divinity school, and I’ve been a Christian since I was 14, but 1 and 2 Chronicles were among the many books of the Bible that I couldn’t have told you much about if someone held a gun to my head and commanded me to regurgitate their plots. (Habakkuk, anyone?) Chronicles was a mystery, so I’ve been doing more background reading than usual in commentaries and such.

And guess what? It turns out I didn’t miss much.

I’ve loved doing the Twible project, and I’ve never struggled to make it entertaining or at least reasonably funny. (Well, except for violent passages like Genesis 19 or Judges 19, which don’t exactly lend themselves to humor.) But Chronicles is a different kettle of fish. It’s basically a retread of material we’ve covered before, but made over for political purposes. We return to the 12 tribes and trace their history (yawn), then rehash the whole kingship saga, but with certain juicy portions omitted. David’s story has been completely whitewashed and is now Bathsheba-free. Absalom’s mutiny is nonexistent.

1 and 2 Chronicles are part of what we call “the historical books,” but it’s hard to ferret out historical truth from propaganda here. Several stories in Chronicles flatly contradict accounts elsewhere in the Bible, which is perhaps not surprising when you consider that these books were written centuries after the stories in question were supposed to have occurred. Chronicles is focused on a twofold agenda:

1) to make it clear that the sun shone out of David’s butt, and
2) to argue that the Second Temple was legitimate and necessary.

So now we know.

Sat 9/18
#Twible 1 Chron 1: Chronicler binges on genealogy for 9 freakin’ chapters. Begat, begat. He must be retired w/lots of time on his hands.

Wed 9/22
#Twible 1 Chron 5: Also-ran tribes of Simeon, Reuben, etc. get their due, but where are Zebulonites & Danites? Excised from the record. Hmm.

Thurs 9/23
#Twible 1 Chron 6: Levite genealogy repeats the same stock names, b/c Zadok is such a cool name you’re gonna want 6+ in each generation.

Before You Attend Jon Stewart's Rally, Read This from James Calvin Davis
archives most recent
More from Beliefnet and our partners
previous posts