Kate Gosselin Gets Religion: A New Book from “Kate Plus 8” Star on Family and Faith 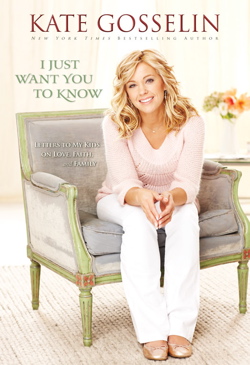 I blame my mother for introducing me to the Gosselin family. During one of her visits last year, TLC was running a marathon of Jon & Kate Plus 8, and Mom was glued to the screen. I watched several episodes with her and was surprised to find that she knew each child’s history and personality. Watching the show for the first time gave me more than a few schadenfreude moments. I saw one episode where Jon and Kate take the kids to Disney World. I couldn’t imagine the stress of keeping track of them all, or scheduling their naps, or dealing with Mouse-induced meltdowns times eight. Those parents deserve a medal, I thought.

And yet the family has come under intense media scrutiny for, well, allowing the media to intensely scrutinize their lives. Americans just can’t get enough of the Gosselins. As our own families get smaller, we’re endlessly fascinated by ones that are supersized. We watch the Gosselins’ show in part because we know that although our lives might seem crazy, we’ll never be potty-training six toddlers simultaneously, on tiny toilets all lined up in a row. We’ll never have to hold back some of our trash from one week to the next just because our allotted bins are already full of diapers. We’ll never have half a dozen kids with fevers all at once. Thanks, benevolent universe!

If we haven’t gotten enough of the Gosselins yet (even with Jon’s well-publicized adultery and Kate’s disastrous recent turn on Dancing with the Stars), the Zondervan book I Just Want You to Know promises the dish on Kate’s kids, religious beliefs, and supersized life. I was prepared to cynically hate this book. And you know what? It’s actually not bad, and there’s a surprising amount of material on religion.

In a chapter called “Dear Jesus,” Kate describes her growing Christian faith when the kids were very small, and her movement away from just looking to God for her own survival to helping others. When the sextuplets were two, she heard about a family with four kids living on the edge, and even though money was still very tight for the Gosselins themselves, Kate felt God calling her to help them:

I wrote out the check right then and there and ran to the mailbox. (You would run too if you had six two-year-olds ready to disassemble your house on a moment’s notice.) When I opened up the mailbox, I saw another envelope inside with a bow on it. It hadn’t come through the mail system. In my best time-saving skills, I ripped open the envelope as I was running back to the house. I literally fell over when I saw what was inside: A gift card for Sam’s Club in the exact amount I had just written the check for.

This is only one example of the many times God has provided perfectly. . . .Chance could not have put that envelope in our mailbox with the gift card. In the exact amount. On the exact day. That still amazes me.

Yes, it’s similar to a hundred miraculous tithing stories you’ve probably heard. But some of those stories are true, and I have a story of my own like this, so I found the anecdote touching.
The way Kate talks about religion seems to be very in keeping with what I’ve observed of her on TV. I think that if she took the Five Love Languages Test (don’t knock the test until you’ve done it; it’s surprisingly revealing), she would come out with “acts of service” as her primary love language. In one episode I heard her yell at Jon, “If you love me, then help me!” That’s pretty classic language for someone who experiences love most strongly when other folks pitch in. So theologically, The Gospel According to Kate is a lot about miraculous providence, with God swooping in to provide what’s needed at precisely the right time. Some might find this a shallow theology, but on the other hand, that’s what God was trying to teach the Israelites with the whole manna-just-for-today concept.

Although there’s a surprising amount of theologizing in this book, a good deal of it is also apologia–an impassioned defense against Kate’s real and perceived critics, both now and of the future (I am thinking of her children’s future therapists here). Admitting in the opening line that her method of raising kids is “unconventional,” Kate wants her kids to understand some of the financial and social pressures of raising eight children, and she and Jon decided to open their lives to reality TV. (Short version: They needed money desperately, they wanted the hour-long DVD to record their kids’ lives, and they had absolutely no idea that a one-off documentary would turn into a reality show juggernaut.)

The book delivers what most fans are after: a behind-the-scenes look at the Gosselins and their eight goslings. A special touch is that each chapter is preceded by a letter to one of the eight children, calling out that child’s unique traits, special memories, and early history. The whole book has an intimate, scrapbook-y feel, and is plastered with adorable photographs of the family in happier times. (Kate focuses here on the early years, before Jon had his impressively precocious middle-age crisis and they got divorced.) The closing pages include a photo album and some of Kate’s favorite recipes–because, hey, if someone with eight kids can find the time to make homemade applesauce, then why can’t you? Slacker.

Even though I liked the book well enough, I’m giving my copy to my mom as a belated Mother’s Day present. It’s mid-June, and I still haven’t sent her Mother’s Day care package. See, Kate’s not the only one who’s struggling to multi-task, and worrying that she’s not doing a good enough job. Here’s to you, Kate: I hereby induct you into the Flunking Sainthood tribe of real people who are just trying to do the best they can.