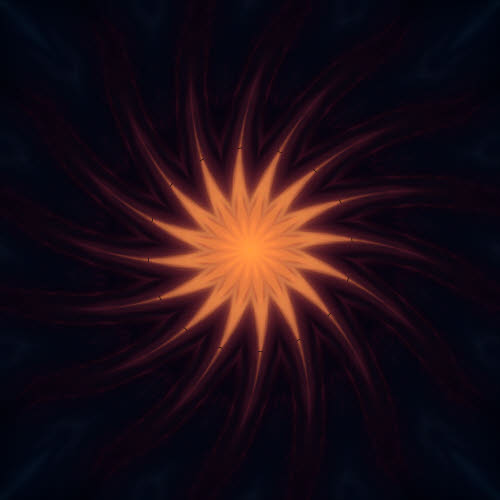 Sunset Swirl mandala, by David J. Bookbinder
The Dynamic Mandala
By Rolf Sattler
A mandala can be a door to the infinite because its center usually represents the source of all existence. However, a mandala is also limited because around its center it portrays the finite, the relative, and this portrayal is always limited and one-sided: only one perspective of the finite, of manifest reality. We can, however, obtain many perspectives on manifest reality, and thus a much more comprehensive picture of manifest reality, if we embrace a multitude of mandalas or the whole set of mandalas.

The dynamic mandala is the whole set of mandalas in a dynamic, transformative relationship in which each mandala is seen as a transformation of other mandalas.
We may creatively imagine the transformation or execute it through specific rules or computer programs. I presented some of the rules for conceptual mandalas in Chapter 5 of my online book Wilber’s AQAL Map and Beyond.
The transformation of mandalas affects mainly the representation of manifest reality. However, even the source, although presumably the same in all mandalas, may be represented differently: for example, by an empty space, or a deity, or the Buddha as a symbol of emptiness. In certain mandalas such as flower mandalas, the center is still part of manifest reality, which means that it is not the source in the above sense from which all manifest reality arises. However, although the source is not represented explicitly, it may be implied through the form of the mandala as a whole that indicates the radiance from a center and thus allows us to feel the mystery of the source of all existence. This is also the case in a mandala that I reproduced in my online book (Fig. 5-8 in Chapter 5).
There are advantages and disadvantages of representing the source explicitly or implicitly. An explicit representation helps us to re-member the source, which is so often forgotten. It might, however, give the impression that the source is separate from manifest reality, or, in other words, that nirvana is separate from samsara. In contrast, in an implicit representation of the source, the source and its manifestation are one, or, in other words, form is emptiness, and emptiness is form. Unfortunately, this may not be obvious and may be ignored. However, many mandalas that imply the source, such as David Bookbinder’s flower mandalas, touch us deeply through their beauty in which the mystery of the source reveals itself.
Regardless of whether the source is represented explicitly or implicitly, mandalas are important for transformation. The dynamic mandala is transformative in a twofold sense:
1. It allows and invites practically endless transformations of mandalas, each of which presents a different perspective on reality.
2. It facilitates transformation of the person who moves from one mandala to another and thus gains new perspectives on reality.
Thus, the dynamic mandala transforms the observed and the observer.
Transformation can be healing because it can create more balance – balance within a person and balance between different mandalas. According to Chinese medicine, health is balance. And balance includes tolerance, which in turn leads to more harmony and peace.
Nonetheless, one might say that any one single mandala is sufficient for personal transformation and healing. In a sense, this is correct because any single mandala can lead to the infinite, the source, the mystery, to transcendence of the finite, which can be healing. But since a mandala comprises both the source and its manifestation, and since the manifestation around the source is expressed differently in different mandalas, the embrace of many mandalas with different representations, different perspectives on manifestation, can prevent that we get stuck in one single representation and perhaps even take it to be the true representation. Believing that there is only one true representation means that all the other ones are false, which can lead to conflict as we have witnessed it throughout history not only with regard to different mandalas but even more with regard to different beliefs, different ideas, different philosophies, different ideologies, and different religions that worship different mandalas.
However, recognizing that different mandalas present different perspectives on manifest reality, allows tolerance because different perspectives complement one another (see Chapter 6 of my online book). Such tolerance, which is healing, is especially important in interpersonal relationships and in society at national and international levels. For this reason, the dynamic mandala, perspectivism and complementarity should play an important role in education from kindergarten to elementary school, high school, university, and adult education in lifelong learning.
There is a continuum between people who are tolerant of different views and those who insist that there is only one correct one. Somewhere along this continuum is Ken Wilber, who insists that his AQAL map of the Kosmos “is the most complete and accurate map we have at this time” (Ken Wilber: The Integral Vision, 2007, p.18). (This map can be seen as an inverted mandala that has the source at the periphery instead of in the center.) I think that Wilber’s map or mandala is indeed most remarkable. It is very comprehensive and shows a good balance of “body, mind, and spirit in self, culture, and nature” (Ken Wilber: The Integral Vision, 2007, pp. 217-218). Nonetheless, Wilber’s map has limitations. One of the most fundamental limitations is Wilber’s insistence that manifest reality is fundamentally holarchical (hierarchical), which means that it is composed of different levels and that each higher level includes and transcends the preceding one. This view is indeed a useful perspective, but it needs to be complemented by other perspectives such as seeing manifest reality as undivided wholeness, a continuum, in terms of Yin-Yang, a network, or in terms of dialectics. If we include these perspectives, we gain a still more comprehensive and more balanced view of the Kosmos, including ourselves. The dynamic mandala comprises all of these perspectives and much more because its transformations are not restricted to conceptual mandalas such as Ken Wilber’s AQAL map but include also other kinds of mandalas such as mathematical mandalas, organic/artistic mandalas, and the mandalas of the wisdom traditions.
Rolf Sattler
http://www.beyondWilber.ca
Discussion:
Art, Healing, and Transformation group
Flower Mandalas Project group
Cultivating Creativity group
Request the 15 Flower Mandalas screensaver: Fifteen Flower Mandalas
Text © 2009, Rolf Sattler
Sunset Swirl mandala image © 2008, David J. Bookbinder 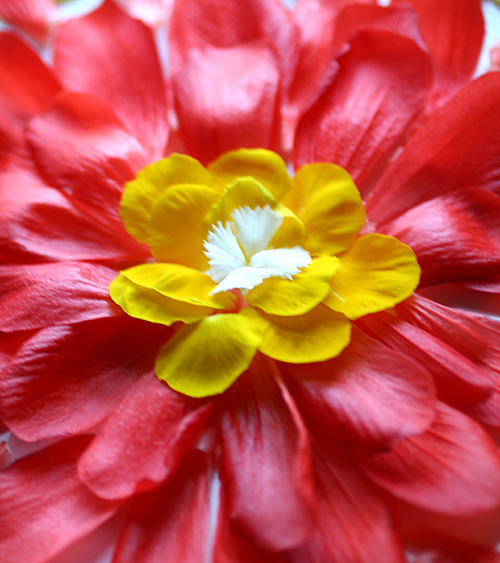