A frequent visitor on the blog – a vocal skeptic who has made clear a rather biting disdain for religion and the faithful – left the following comment on a post a few days ago. These thoughts on excess, standards for skepticism and the nature of belief are provocative. Would love to hear your thoughts…


we can’t talk about religion without talking about excess. this doesn’t mean that everyone who is religious is a fantatic. but it does mean that religious beliefs are very important to those who hold them, even if they do not make sense. indeed, people will sometimes sacrifice their lives and the lives of other people for them; their relationship to their gods can be the most important thing in their lives. by definition these supernatural forces must be more powerful than the people who believe in them. they are often perceived as both ominiscient and omnipotent.

those who do not believe in supernatural beings are struck by two things; first, that these deities seem to be, by definition, excessive – excessively punitive, excessively loving, excessively demanding, and excessively in need of people’s devotion. and second, that religious believers, even moderate ones, seem to have excessive confidence in their gods, and are excessively eager to please them.

the more extreme skeptics of religion, often in rather patronizing ways, find the whole thing rather irrational. but where do the skeptics get their knowledge of what is irrational from? how does anyone know what too much belief is? it is the hope of modern liberals that we can all talk about the things that matter most to us without losing our tempers or killing people. do we believe this too much?
what mattered most to most people, until very recently, was their relationship with their gods, and gods, traditionally, have been to die for; one of the things people have been able to do, in the name of religion, is sacrifice their lives and the lives of others.

what people use their religious beliefs to do – what they do in the name of their religions – might make us wonder not simply what should we believe, but what kind of thing is a belief? clearly a belief can be something that permits you to kill people. our religious beliefs may be the tools we use to manage – to legitimate and contain – the excesses of our nature. so from a psychoanalytic point of view we don’t only have to say, as freud said, that religion is for people who are frightened of growing up. we can say, though, that we have delegated to a figure called god all the excesses, including addictions and nasty habits, we find most troubling in ourselves, which broadly speaking are our excessive love for ourselves.

god in this view carries the part of ourselves that asks too much of us, that is endlessly demanding, that wants us to be better than we are.
being excessive in words or actions, in inflammatory rhetoric or violent actions, is a form of communication. what the religious fanatic knows is just how contagious excess can be. excessive words and actions are haunting, they make one’s presence felt; they make people excessive in their responses. priests, nietzsche wrote, have shown almost inexhaustible ingenuity in exploring the implications of this one question: how is an excess of emotion to be attained? if you can make people excessively emotional you can manipulate them, and one of the best ways of making them excessively emotional is to do something excessive to them. suicide bombers don’t convert people, but they make the existence of their religion unforgettable, undismissible.

there is another possibility, the one that i want to end on because it seems to me potentially the most interesting, though perhaps the most daunting. this is that the religious fanatic is someone for whom something about themselves and their lives is too much; and because not knowing what that is is so disturbing they need to locate it as soon as possible. because the state of frustration cannot be borne – because it is literally unbearable, as long-term personal and political injustice always is – it requires an extreme solution.
in this account irrational behavior shows us how obscure we are to ourselves or how we obscure ourselves; how our frustrations, odd as this may seem, are excessively difficult to locate, to formulate. wherever and whenever we are excessive in our lives it is the sign of an as yet unknown deprivation. our excesses are the best clue we have to our own poverty, and our best way of concealing it from ourselves. 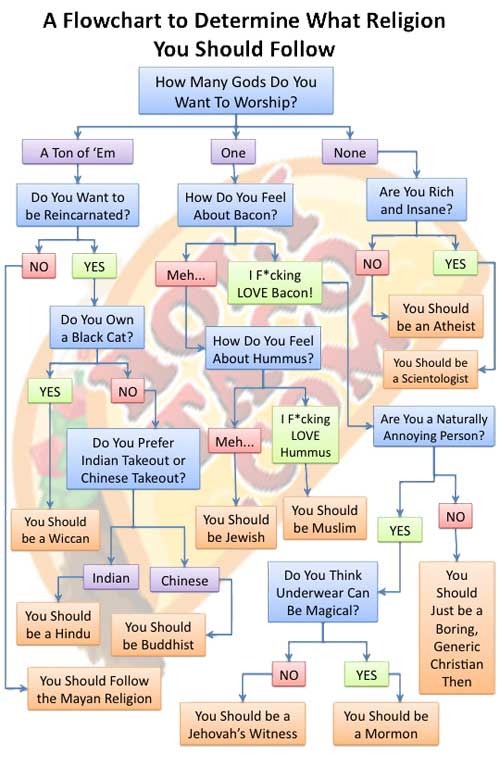 Lest My Spiritually Interested Friends and I Begin to Take Ourselves Too Seriously...
archives most recent
More from Beliefnet and our partners
previous posts

Does the Protestant Work Ethic Hold Up in the 21st Century

Does the Protestant Work Ethic Hold Up in the 21st Century?

Woke this morning thinking about sacrifice and how infrequently most of us, myself included, actually sacrifice anything of true value to ourselves for God and others. Sure we give money to our favorite charities. But when is the last time we actually parted with money that would have gone to paying our bills or buying […]